Whoa there, Tyga and Kylie Jenner! When the PDA-loving couple snapped a mirror selfie on Oct. 16, Tyga got pretty handsy and almost grabbed his GF’s lady part right on camera. See the racy pic right here!
While Tyga, 26, was the one clearly having the fun with his frisky hand placement, it was Kylie who shared the photo. Clearly she didn’t care that the shot was almost NSFW! The 19-year-old was dressed in nothing but a white bodysuit, while her man was fully dressed in a pair of red pants and a black t-shirt. No wonder Tyga couldn’t help getting handsy — Kylie was far less clothed than him!

Who knows what Tyga and Kylie were up to when they had their mirror photo shoot, but we’re thinking it probably involved some sexy time for the couple. Kylie looked totally hot in her skin-tight ensemble, and you could even see a little smirk on Tyga’s face as his hand went for the crotch grab. Yeah, they definitely were having Sunday Funday…and wanted to let the world know!

Although Kylie’s hot bodysuit seemed like something that was only for Tyga’s eyes (well, except for the fact that she shared it on social media), she actually wore the risqué piece in public — to a little kid’s birthday party, of all places! Kylie sported her white leotard to King Cairo‘s 4th birthday party, pairing it with an oversized race car jacket and red high-top shoes. Tyga was probably trying to focus on his son during the party, but we wouldn’t doubt if he was pretty distracted by how hot his girl looked!

Provocativeness aside, we’re happy to see Kylie and Tyga continuing to look so happy together. The on-and-off couple have seemingly been doing better than ever since their last split, which Kylie recently admitted was just a test to see if they could be apart. Clearly Kylie and Tyga determined they can’t live without each other, and they sure love celebrating that with racy pics! 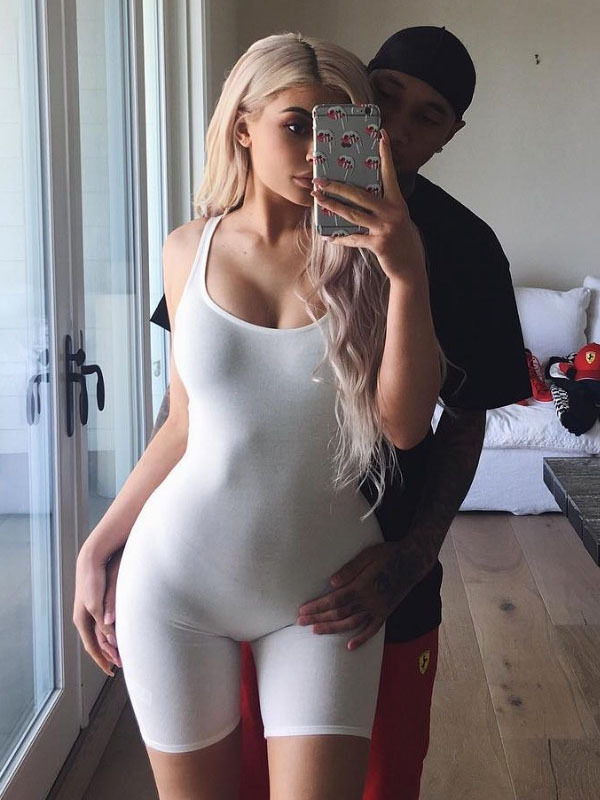