Priyanka Chopra wore a top that invited the wrath of the social media. Twitterati immediately demanded an explanation!
Priyanka Chopra is the newest controversy queen. Last time the actress was dragged into the racism controversy when she refused to be defined by her colour. The actress also was trolled for her PERFECT armpits. Even her debut Bhojpuri production venture was slammed for promoting vulgarity. The actress is again and news and this time for sporting a T that has spurred another debate. Twitteratis are always on the edge of losing their cool and slamming celebrities. Priyanka Chopra becomes a victim to yet another social outburst and this time, it’s for the T-Shirt that she donned in cover of Condé Nast Traveller. 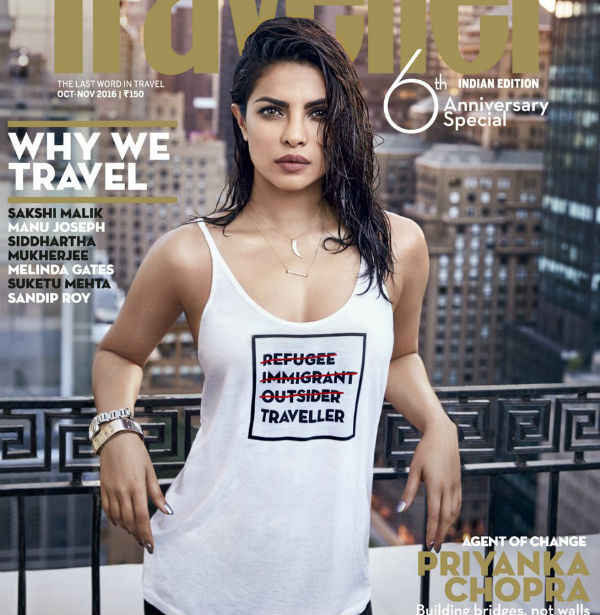 The actress wore a top that said “Refugee, Immigrant, Outsider, Traveller” only to invite the wrath of the social media. Twitterati immediately demanded an explanation to why she would wear that top. Though the actress has not reacted over it yet, people are losing it on social media. Priyanka Chopra’s top simply puts it out there that she is a traveller and loves to travel but a lot of people are calling it insensitive.

People called her insensitive and asked her if she could ever relate to refugees and that refugees don’t really have a choice. Some people even called her shallow on Twitter. PeeCee decided to don the top to make a statement about travellers. Little did she know that it would hurt people’s sentiments and send out a wrong message. Neither Priyanka Chopra nor the magazine has responded to the comments yet. But we’re guessing once the issues dials down, PeeCee will speak up since the actress has always given it back. Remember the whole armpit incident with Maxim? We’re waiting for the Quantico actress to clarify and speak about the issue.