Just 1 month after tying the knot, a new report claims Meghan Markle is pregnant with not one, but two babies! She & Prince Harry allegedly found out immediately after their honeymoon, and they’re filled with ‘happiness!’

Do Meghan Markle, 36, and Prince Harry, 33, have honeymoon babies on the way? A new report claims they do — and that they’re having a boy and a girl! The two found out they were expecting upon returning from their honeymoon in East Africa after their wedding on May 19, according to OK!magazine, and the outlet also claims they haven’t been able to keep quiet about the exciting news! The first people they reportedly told were Kate Middleton, 36, and Prince William, 35.

“They were so supportive,” a source for OK! told the mag. “[Harry and Meghan] are just so over the moon with happiness! They didn’t expect it to happen so soon, and they were all the more giddy to learn they were having two — one a boy, the other a girl.” Harry also reportedly confided in his dad, Prince Charles; his stepmom, Camilla; and even Queen Elizabeth II. Already the royal cannot wait to be a father — and Meghan feels the same way. Just last week, on June 14, Meghan revealed to a well-wisher that Harry is “the best husband” ever, and it seems he also wants to be the best dad ever.

To ensure motherhood goes smoothly for Meghan, and is everything she’s ever wished for, Harry is allegedly willing to raise the twins in the US with Meghan, so that she can be close to home. “Meghan has made countless sacrifices to adjust to royal life,” the insider explained. “He knows part of her heart will always be in California, and he wants to ensure that the woman of his dreams — and the mother of his children — is content.” 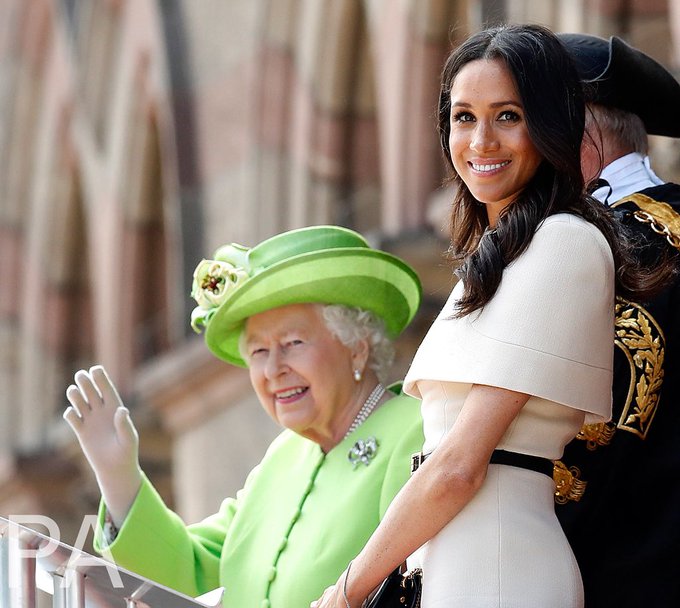 Meghan clearly isn’t showing yet, as the above photo was taken just last week, but if she IS pregnant, OK! claims she’s determined to have a smooth pregnancy. “Kate is sharing tips on everything from concealing a baby bump at royal functions to her favorite prenatal workouts,” the outlet’s source said. “She’s had access to the very best health experts throughout her pregnancies, so she’s happy to let Meghan in on everything she knows.” Only time will tell if the newly-crowned duchess truly is expecting, but for now, nothing has been confirmed!