Sanju has now released and is there for the world to see and review. While the audience has been gushing about the film ever since the first show, the reviews are divided. Now, it remains to be seen as to what the outcome of the film will be. And we will be able to assess that only when the box office reports start coming in. For now, the cast and crew involved with the film are taking a breather and letting their work do all the talking at the theatres. After a whirlwind round of promotions, it is only imperative that they sit back and enjoy the accolades pouring in. However, not all are resting easy. Some are still promoting the film. Like Ranbir Kapoor‘s father, Rishi Kapoor, who took to Twitter to share a throwback picture.

You see, this throwback picture doesn’t feature Ranbir Kapoor and nor does it feature Sanjay Dutt. The picture is one from when the industry stood in support of the actor. In the picture shared, we see Ajay Devgn, Saif Ali Khan, Salman Khan and Akshay Kumar standing with posters that read, “Sanju, we’re with you.” Now, obviously this picture is from the past, when Sanjay Dutt was booked and jailed under TADA, but the manner in which Rishi has used it to promote the film, is indeed funny, don’t you think? Check out Rishi’s post right here: 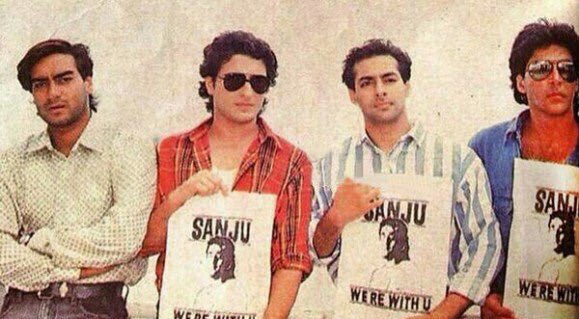 Thank you! These people been promoting the film ever since!

The Editor-in-Chief of Bollywood Life, Tushar P Joshi, watched the film and was blown away by the way Ranbir has performed. In his three-and-a-half star review of the film, he wrote, “Sanju was a huge risk for Ranbir and it pays off beautifully for the versatile actor. He doesn’t make a caricature out of Dutt and instead gives him the right dose of empathy and mystery he embodies. Ranbir becomes Sanju and that’s the strongest point of the film. Sanju is undoubtedly Ranbir Kapoor’s career best performance and will fetch him all the awards and recognition.”