Bollywood films are bursting with bright colors and intricate dance numbers, with the infectious charisma of Bollywood’s leading actors resulting in iconic performances. It is no surprise that Indian cinematography is recognized world-wide, with fans tuning in to blockbusters on every continent. These Bollywood actors are not only leading men in the movies, but also focus on their fitness, setting a great example to fans.

Bollywood, like India itself, has been growing in power and influence over the past few decades. In a country of over 1.2 billion people, celebrities hold a great deal of influence on trends and social life. And no one is more visible than Bollywood actors, putting them in a unique position to promote a healthy lifestyle. Many high profile Bollywood heartthrobs have made their name by getting fit and they are at the forefront of a health and fitness movement that is resonating not only in India, but to their fans throughout the world.

HFR founder Samir Becic had this to say about the movie stars on this list: “Bollywood’s fittest actors don’t only represent a man in a leading role, but also India’s obsession with healthy lifestyle and fitness that has culminated over the last 10 years. That is why these actors are excellent ambassadors of a healthy lifestyle, not only on the Indian subcontinent, but rather for the entire world. Bollywood is becoming a second Hollywood.”
Shah Rukh Khan 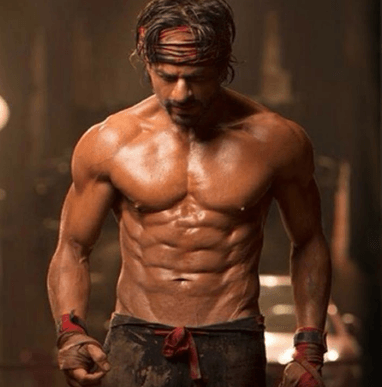 Workout usually consists of weight training along with working on his abs, 4 times a week
Also does about 30-60 minutes of cardio every day
1.Protein drink after workout
2.Follows a high-protein, low-fat diet
3.Eats high fiber complex carbs
4.Avoids alcohol and fried food
5.Avoids simple carbohydrates and refined carbs that have added sugar
continue in next post