What’s it like to work with the greatest acting teacher in  America? That’s the premise behind a compelling, funny and surprising new 22 minute film, Master Maggie by hot director, Matthew Bonifacio.

Famed actors Robert De Niro, Marlon Brando, Elizabeth Taylor, Martin Sheen and Harvey Keitel, all worked with one of the world’s most renowned acting teacher and coaches, Stella Adler, who is the inspiration for Master Maggie‘s principal character, according to film director, Matthew Bonifacio,

“I always thought it would be fascinating to see what it’s like watching a private acting coach work with an actor, just that one on one experience,” he said in an EXCLUSIVE interview. And Bonifacio, 46, is right. His star coach, ‘Maggie’, played by Sopranos/ Goodfellas actress Lorraine Bracco is mesmerizing. Stella Adler, who her character is based on, founded her legendary acting school — the Stella Adler Studio of Acting — in 1949 in New York City. It still continues today under the direction of her grandson, and claims star studded alumni like Salma Hayek, Mark Ruffalo and Benicio De Toro. Bonifacio, a Brooklyn, NY native, who teaches acting himself at Pace University, shows Bracco as Master Maggie meeting one on one with veteran actor, Brian Dennehy, as he prepares for a major new role. Bonifacio points out that this is exactly what happens in the real world of A List actors — they hire their favorite long term teachers or coaches to help prepare them for new roles or auditions.

“Being an acting coach, as well, I’m always aware of when actors thank a coach during their Oscar speeches. When they get a new TV series or big movie, they go to these coaches to work on the character and scenes,” explains Bonifacio, who gives Sam Rockwell, as an example of an actor, who thanked one of this acting coaches in interviews after winning the Best Supporting Actor Award in 2018, for his role as a racist police officer in Three Billboards Outside Ebbing, Missouri.

“It’s a smart thing to do,” Bonifacio tells HollywoodLife. “Like you go to the gym, some people have a trainer or you see a nutritionist and you get advice. You see a doctor. You see an acting coach.” 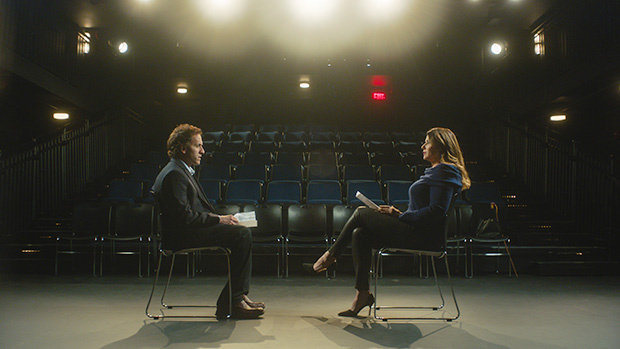 Bracco’s Master Maggie is an intimidating character as she challenges her ‘students’ to give authentic performances in their sessions with her — something which is true to reality according to the director. “These master teachers don’t just throw out compliments. Like the biggest compliment you could get, would be — ‘You’re okay. You’re doing okay’ or  ‘You’re on the right track.’ But that means the world because 90% of the time, they’re lacing into you on what needs to be worked on. They’re calling you out for not being truthful, for not being honest with your work.”

After Master Maggie works with Dennehy, she has sessions with Kenan Thompson, and then a newcomer (Neil Jain), who begs for her help on prepping him for an audition for the TV show, Law & Order. When Master Maggie turns him down cold, he is devastated but persistent, until finally she relents. After the kind of tough, raw feedback that master coaches are known for, he finally wins her approval… but there’s a twist.

Bonifacio’s wife, Julianna Gelinas Bonifacio, who co-wrote the script with him, came up with the brilliant twist. Then once, they had the script they had to convince their number one choice to play Maggie — Lorraine Bracco — to take the role. They had never met her. “Yes, we definitely had Lorraine in mind for the role,” Bonifacio says. “It’s hard to explain, but there’s just an aura about her that felt like, ‘I believe she could be an acting teacher.’

Bonifacio sent the script to her manager and fortunately both he and Bracco liked it, a dinner was set up and everyone involved, connected. They had a similar luck sending the script to reps for Brian Dennehy and Kenan Thompson, who they very much admired, but also didn’t know. Fortunately they were ‘yeses’ as well.

While Master Maggie is just 22 minutes long, it’s being seen on the film festival circuit with an eye to an Oscar nomination, after premiering at the Tribeca Film Festival.

Hopefully, you will soon be able to see it on iTunes, Amazon, Netflix or cable. And Bonifacio points to the possibility of the short film evolving into a feature film, like Whiplash or Slingblade, which both began their lives as ‘shorts.’