n May 1861, a new act at the Alhambra theatre in Leicester Square was the talk of London. The audience screamed in delight as a young Frenchman performed his flying trapeze routine, leaping between three wires above their heads before eventually somersaulting to a mattress, where he took a bow. The performer’s talent allowed him to command an unheard-of fee, £180 a week, while his impressive musculature showcased in a tight one-piece garment earned him so many female fans that George Leybourne wrote a song about him:

Jules Leotard, c 1865.
Jules Léotard, c1865. Photograph: Science & Society Picture Library/Getty Images
“He’d fly through the air with the greatest of ease
A daring young man on the flying trapeze.
His movements were graceful
All girls he could please
And my love he purloined away.”

His name was Jules Léotard. Léotard died of smallpox a few years later, but the look he devised – equal parts athleticism and sex appeal – survived. When Rihanna plays the first UK date of her Anti tour on Friday, she will likely make her stage entrance in an oversized Craig Green canvas coat, throwing it off to reveal a silky leotard custom-made by Adam Selman, worn with a pair of thigh-high boots. A week later, Beyoncé will stride on to the same stage in a puff-shouldered, Victorian-embroidery-inspired leotard by Dean and Dan Caten’s Dsquared2, worn over fishnet tights, before changing into a white Balmain version with silk ruffles and pearls, and then a Roberto Cavalli one with gold embroidery emphasising the high-cut legs and military-inspired frogging at the bodice, and then a Gucci swag-shouldered velvet number. 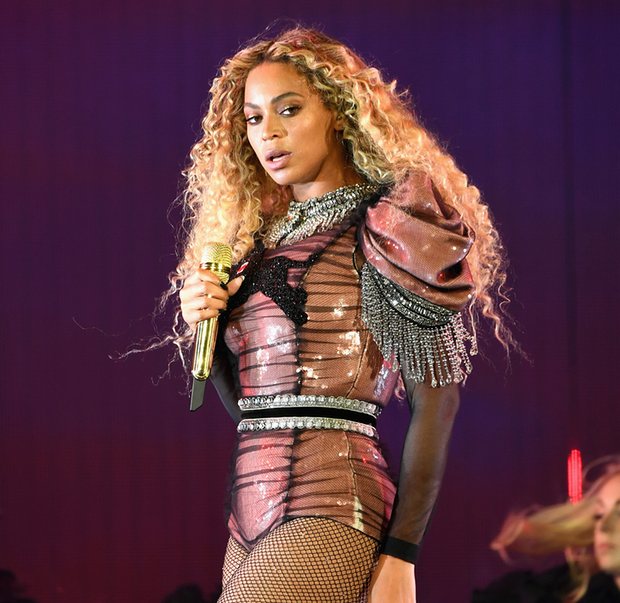 RiRi and Beyoncé’s stylists refer to these looks not as leotards, but as bodysuits. On the current cover of American Elle, model and social media It girl Bella Hadid wears a long-sleeved black Azzedine Alaia one-piece cut high at the sides; the shape is sporty, but the beret (read: Paris) and red lipstick (glamour) and sheer black hosiery (sex) signal that this cover is about high fashion. The semantics matter, because while a leotard is a very particular cocktail of theatricality and function that belongs in the spotlight – whether at Wembley stadium, on the flying trapeze, or in Wonder Woman’s phone booth – calling it a bodysuit connects the look to fashion at ground level. The bodysuit works on stage over a pair of fishnets, but it is happening in real life too, under a pair of jeans or dungarees. Walk into Topshop at Oxford Circus right now, and you will find a huge swath of prime floorspace devoted to bodysuits, from flirty off-the-shoulder ruffled versions (styled with high-waist jeans) to casual, T-shirt-vibe grey-marl ones paired with silken, side-striped tracksuit bottoms. And there can be no better litmus test of the arrival of the bodysuit in the mainstream than the fact that Marks & Spencer has added a worn-to-be-seen black mesh, high-necked body to its range of discreet, hidden-away shapewear.

Meanwhile, at Tate Modern, the opening-weekend live art performance piece created by Solange Knowles (sister of Beyoncé, and therefore bodysuit royalty) starred dancers in long-sleeved, pale-blue bodysuits. The leotard/bodysuit has a close relationship with athleticism and a more complicated one with sexuality. This holds up a mirror to where we are at in fashion right now: in love with sport, slightly confused about where we stand on being sexy. Sportswear is the influence that every catwalk designer cites backstage, athleisure is the fastest-growing sector of fashion, and the aesthetic has permeated everything from the trend for flat shoes to the vogue for racer-back and mesh-panelled eveningwear on the red carpet. But while we are unanimous about sport, we are conflicted about sex. Just look at the rows, the social media space, the memes and column inches sparked by Kim Kardashian’s assertion that nude selfies represent empowerment. 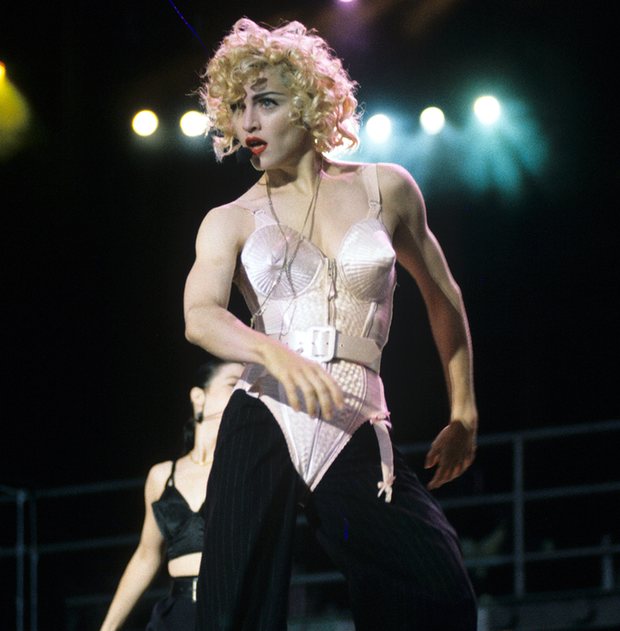 Madonna in the Jean Paul Gaultier bodysuit for her Blonde Ambition tour in 1990. Photograph: Eugene Adebari/REX/Shutterstock

And so the point where sporty meets sexy is a flashpoint in fashion. We want women to do exercise to be fit and healthy, and we are OK with women being proud of being in good shape only if the message is framed around strength and hard work; but we don’t like it when these messages are co-opted in the cause of old-fashioned ogling – and the modern leotard speaks to this contemporary ambivalence.

When Madonna wore the iconic cone-bra Jean Paul Gaultier bodysuit for her Blonde Ambition tour in 1990, the motel-room satin and the comic-book sexbot silhouette were deliberately provocative. But the bodysuits worn by 2016’s pop queens have a tougher edge. Nineties Madonna looks kittenish compared with Beyoncé in the black leather-jacketed leotard that she wore to perform Formation at the Super Bowl in February, or Lady Gaga in the power-shouldered gunmetal grey Versace bodysuit that she wore to the Met Gala in May.

One bodysuit reference that contemporary stylists and designers often bring up are Helmut Newton’s photos of Cindy Crawford, from 1991. In one, she wears a black fringed bodysuit with yellow high heels, sitting on the pavement next to a Rolls-Royce; in another, she plays a grand piano in a simple white tank suit. They are very sexy images, but with that air of wholesomeness that Crawford can bring even to the steamiest pose. And the composition of both shots is such that the musculature of the legs and arms is the focus – unusual in the cleavage-obsessed 90s. It is this balance of strength and sexuality that the modern bodysuit tries to emulate. 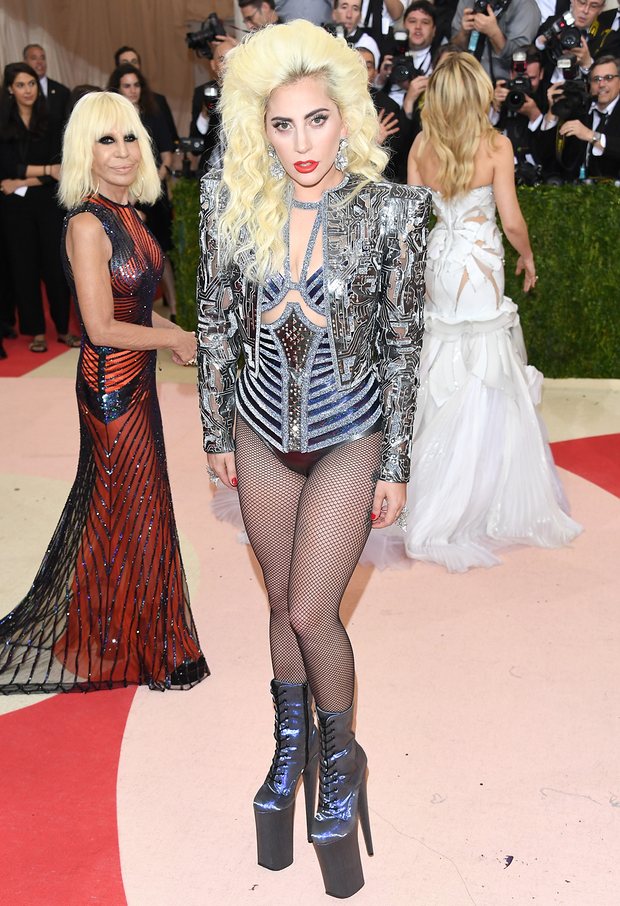 In competitive gymnastics, leotards traditionally have long sleeves, because the shape emphasises the line of the arm. The bodysuit of 2016 – both on stage, on magazine covers, on the shopfloor – often has long sleeves as well. While a tank-style sleeveless bodysuit can look a little beauty-pageant-swimsuit-parade, the addition of a sleeve makes it more formal. For an image of strength, determination – and, let’s be honest, obsessive body-perfection – it would be hard to top Nadia Comaneci, scoring the first Olympic perfect 10 at the Montreal Olympics in 1976 in a long-sleeved white leotard. Power dressing comes in many forms. At Wembley stadium this weekend and next, the reigning queens of pop will be in the undisputed alpha uniform of 2016.