Last week Tiger Shroff’s third film and his first superhero film A Flying Jatt released. Everyone had high expectations from the film due to the fact that it was his third film and he has had 100 perc

Like father like son…
Last week Tiger Shroff‘s third film and his first superhero film A Flying Jatt released. Everyone had high expectations from the film due to the fact that it was his third film and he has had 100 percent success rate so far with Heropanti grossing Rs 50 crores approx. at the domestic box office and his second film taking an opening even better than superstar like Akshay Kumar’s Airlift and went on to earn Rs 75 crores approx at the domestic box office. The stakes were high, as this was his most expensive film till date. Everyone expected it to take a flying start and fly high at the box office but like the superhero in the movie who was scared of the heights hence used to fly on almost ground level, the film couldn’t fly high at the box office. So far the film has earned over Rs 35 crores at the domestic Box office. The figure may not seemed too low to diss out a film but when compared to the cost and the opening of Tiger Shroff’s previous film Baaghi, whose weekend collection itself was more than the six days collection of this film.

While doing the analysis of A Flying Jatt‘s performance at the domestic box office, I couldn’t help but notice its similarity to that of his father Jackie Shroff’s 1985 superhero film Shiva Ka Insaaf. This super hero film was India’s first 3D hindi film and had various similarities with A Flying Jatt.

Here are three similarities in Shiva Ka Insaaf and A Flying Jatt: 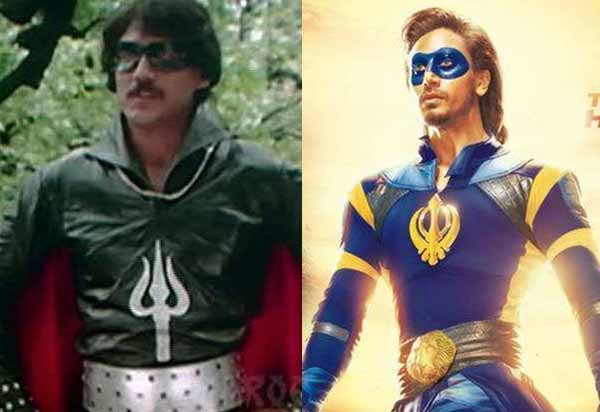 The first look of A Flying Jatt‘s costume, instantly reminded me of Shiva’s costume from Shiva Ka Insaaf. Both wore eye mask one in blue and other in black. Both the superheroes had their respective religious logos showcased on their superhero costume. A Flying Jatt had a religious symbol of Sikhism ‘Khanda’ and Shiva Ka Insaaf had a Trident, weapon of Lord Shiva.

Shiva Ka Insaaf was a forgettable flick and an average grosser at the box office. Now we just have to see where A Flying Jatt lands once its flight ends. But the way it is performing at the box office, it won’t go very far.