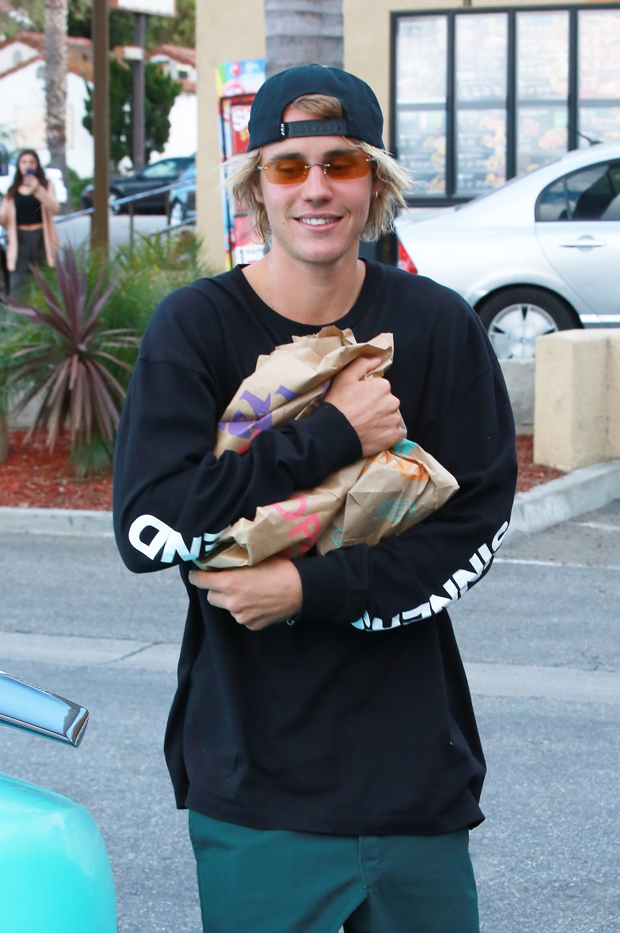 What the heck? Justin Bieber needed to make a bathroom pit stop at Taco Bell, but ended up in the ladies room. We’ve got the wild pics.

We hope he at least put the seat down! Justin Bieber, 24, decided to use the women’s bathroom while making a Taco Bell run on Apr. 19 and the paparazzi caught him sheepishly sneaking out from the clearly marked restroom. There has to be an explanation for this. Maybe the men’s room was occupied and he really had to go? Or maybe he didn’t want to use a urinal in front of other guys? We’re sure most women would probably scream with joy to find themselves one on one with the Biebs in an enclosed space, but a ladies bathroom really isn’t the right place.

While he looked totally busted when he came out from the women’s restroom, the rest of his Taco Bell time was a blast! He seriously looked like the happiest customer ever as he emerged from the Studio City location with two massive bags of the good stuff. He even held onto them tightly to his chest while grinning from ear to ear. Taco Bell is yummy, but this has to be the happiest we’ve ever seen the Biebs look! Who needs a girlfriend when fast food can make someone so filled with joy!
Now’s the big question, what did he order that made him so happy? They do have new nacho fries that are super delicious. How about may a cheesy Gordita Crunch or a Chalupa Supreme?! Whatever he purchased he sure got plenty as his bags are filled with the good stuff. It’s so nice to see that with all of his millions of dollars, something as simple as Taco Bell brings Justin so much unbridled pleasure. We hope he was hungry.