Popular faces, controversies, nasty fights, mud slinging, personal attacks – the eleventh season has it all. It’s being hailed as the most controversial season of all times. But, the BARC (Broadcast Audience Research Council of India) data for the first three weeks of October paints a completely different picture. You will be shocked to know that the ratings for the show have only dipped since its premiere. It managed to grab the tenth rank in the urban markets just once in the three weeks it has aired. The show hasn’t even once featured on the list of top 20 shows in the rural category.

Salman Khan‘s show opened to a TRP of 2.9 and managed to get just 1.6 during weekdays, which is one of the lowest ratings in the history of Bigg Boss. The show recorded its biggest opening in Season 5 (hosted by Sanjay Dutt) with a TRP of 4.30. Season 3 (hosted by Amitabh Bachchan) received the lowest opening of 1.96.

The current season stood at the eleventh position in the urban category on the BARC charts with merely 4.9 million impressions. This was the same week when Priyank Sharma got kicked out of the house for misbehaving with Akaash Dadlani while Zubair Khan got eliminated by the contestants. 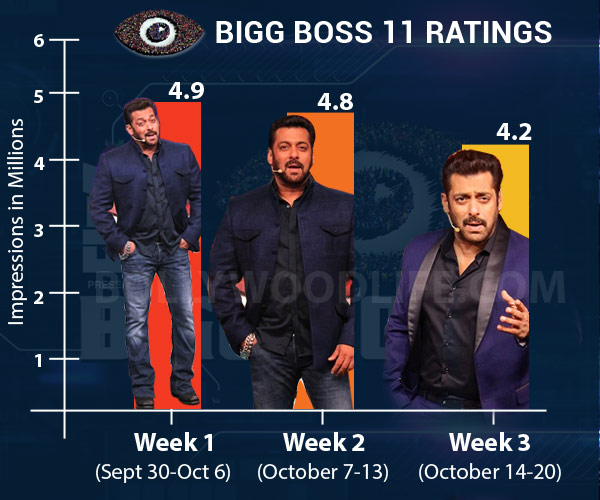 Bigg Boss 11 surely climbed up the charts and ranked at the tenth position in the second week but it just garnered 4.84 million impressions in the urban category. It got a TRP of 2.2 on weekdays and 2.3 on weekends.

The reality show saw a further dip in the third week of October when it registered mere 4.2 million impressions, as per BARC data. It slipped to the 12th slot in the urban ratings.

Bigg Boss 11 has a long to go and it still remains to be seen whether it will be able to stand up to people’s high expectations. It will be interesting to see how fruitful cringe pop Dhinchak Pooja and handsome hunk Priyank Sharma’s entries will turn out to be.