Aamir Khan will flaunt his versatility once again in the film ‘Dangal’. The movie will see Aamir in the role of a wrestler. The highly talented actor will portray the role of Mahavir Singh Phogat. After an ample amount of wait, finally, the new poster of the film is unveiled.

Aamir who is credited for his realistic acting skills has made tremendous efforts to fit in the shoes of the character. The superstar who is rightly called the perfectionist of the tinsel town has essayed an age gap too. In order to do justice to the age gap the actor has transformed unbelievably.

The 3 Idiots actor who plays a proud father in the film has finally launched its new poster. The intellectual actor took to the micro blogging site Twitter and tweeted, “Mhaari chhoriyaan chhoron se kum hain ke?” 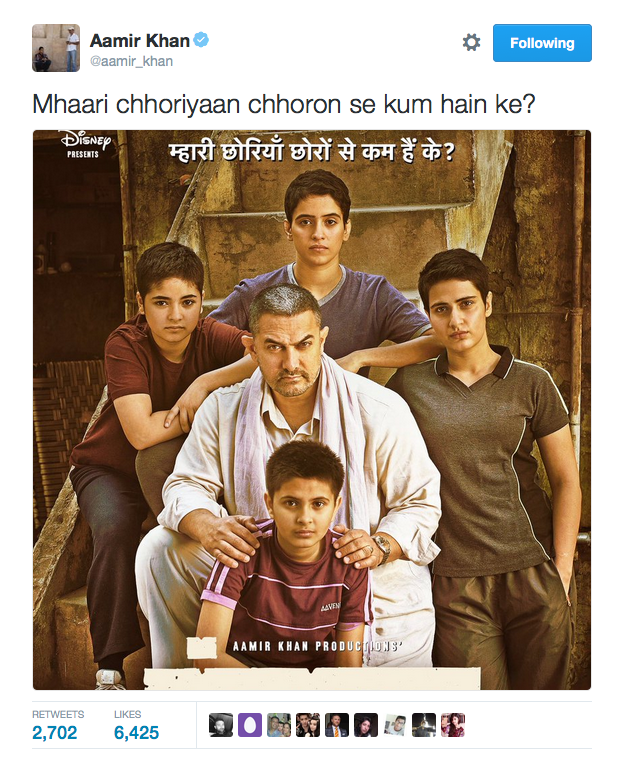 The new poster surely hints at the fact that the movie will resemble the aspect of women empowerment. The look of the poster sees Aamir as a proud father. The caption translates as “Are our girls less than boys?”

With a highly realistic backdrop, the film is surely going to be very intriguing. The poster sees Aamir Khan’s character sitting with his four daughters. With determination in the eyes and a fierce look ‘Dangal’ is undoubtedly going to be enchanting.

‘Dangal’ stars actors Fatima Sana Sheikh and Sanya Malhotra in lead roles along with Aamir. The much-awaited film is directed by Nitesh Tiwari and is slated to release on December 23rd, 2016.