Shah Rukh Khan and Salman Khan have kept everyone on their toes since the time they first bonded during Baba Siddiqui’s Iftaar party back in 2014. Since then, every time these two superstars have come together, they have given us major friendship goals. So when recently the two of them were seen cycling on the streets of Mumbai in the wee hours of the morning it made us drool over this lovely bond. While everyone else is happy to see them bond, Aamir Khan has kept mum on it. Recently, during the poster launch of his latest film ‘Dangal,’ when Aamir was asked about his reaction to the viral pictures of Shahrukh & Salman he said, “Aise thodi hai vo mera friend hai toh kisi aur ka friend nahi ho sakta (Just because he is my friend doesn’t mean he cannot be anyone else’s). I’m very happy that Salman and Shah Rukh are spending time together and went for cycling. I’m very happy.’ 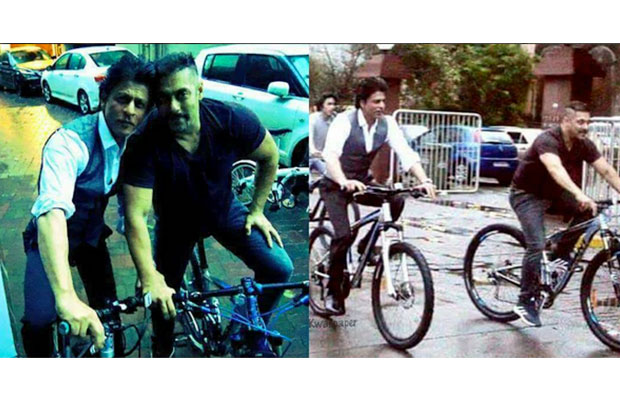 Mr. Perfectionist is one of Bollywood’s most intelligent actors, who keeps away from publicity and is seen as a recluse, has his own share of friends in B-town. His friendship with these celebrities has spanned over the years and with the passing of time, his industry friends seem to become all the more fond of him, also making some new friends along the way.
Aamir and Salman Khan – Everyone knows about Salman and Aamir’s friendship. The two Khans, considered as the two most powerful stars in the industry, share a great camaraderie. Aamir was one the integral members present at Arpita Khan’s wedding, Salman’s darling young sister. Not only that, Aamir danced and participated in the festivities. The two celebs were loved together in the cult classic Andaz Apna Apna and since then, there has been no looking back for the two. Salman and Aamir have often been spotted together, and have praised each other in public. Recently, when Aamir’s December 2014 release PK was surrounded by controversies, Sallu chose to support his friend and tweeted, “is P K not an amazzziiiiing film?” This friendship seems to go a long way. While promoting Salman`s Jai Ho on social media, Aamir had posted a picture of the two peeing together and captioned it as “Do dost ek jhaad pe susu kartein hain toh dosti badti hai” 1 day to go…Jai Ho!!!”