Laura Dern is compelling and powerful in ‘Trial By Fire’. — A film based on the true story about Elizabeth Gilbert, a teacher who fights tirelessly for the freedom of a Texas inmate on death row. She details her emotional experience filming in a prison.

Laura Dern was made to play the role of Elizabeth Gilbert in Trial By Fire (in theaters on May 17). The Edward Zwick film tells the real-life story of Cameron Todd Willingham (Jack O’Connell) — a poor, uneducated man with a violent history and a criminal record, who finds himself on death row in Texas in 1992. Cameron awaits the death penalty after being convicted of the arson-related homicide of his three young children. He would eventually sit on death row for 12 years. With very few people in his corner, Cameron maintains his innocence. And, when he meets Elizabeth, a teacher, the two instantly become close, which leads to her fighting for his freedom before his execution.

The Emmy and Golden Globe-winning actress said she spent a great deal of her time researching the life and story of both Elizabeth and Cameron, to prepare for her role, which was partially filmed in a maximum security prison. “As an actor, you immerse yourself in the story and sometimes it really impacts you in a way that it is hard to move from it,” she told HollywoodLife during an exclusive interview at the film’s New York premiere on May 13. “But, to film in prison, and particularly in maximum security prison, and even prisons that have death row inmates, was deeply heartbreaking to experience the reality of the numbers of those incarcerated in this country and why they’re there. — It’s tragic,” she said. “We have a lot to learn in terms of race in this country. It’s just horrific.”

After becoming more educated about the death penalty and Cameron’s case in particular, Laura is hoping Trial By Fire will contribute to a deeper conversation about the topic. “I’ve been learning so much about death sentence in general in this country and the idea that anyone, but particularly people who consider themselves conscious of being Christian in this country, that they hold the words, ‘Thou shalt not kill’ so closely to their hearts, and yet we we’re still killing people in this country,” she explained. “And, looking at the statistics has really taught me a lot in just how much money it costs the United States and individual states. It’s so mind blowing.” 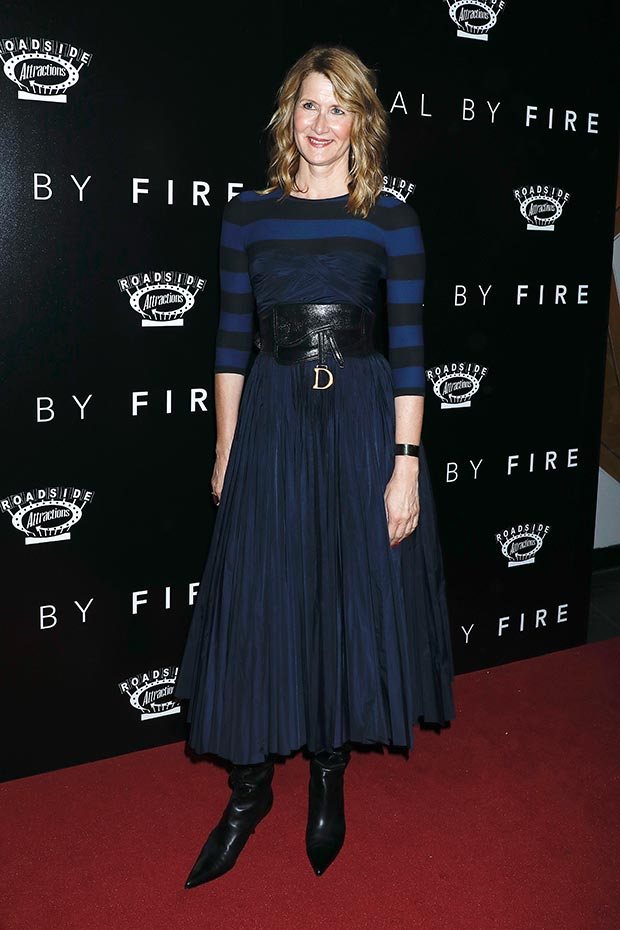 Laura went on to explain how she believes if even one innocent life was taken by the death penalty, then it should be abolished entirely. “We have a lot to learn and hopefully we can do it much faster,” Laura urged. “Because, many great films, many beautiful articles and books have been written to teach people the tragedy of innocent men and women who have been sentenced to death wrongfully in this country. And if one person is sentenced to death and was innocent, then in my opinion we have to abolish it,” she continued.

Laura gushed over how lucky she felt to have the real Elizabeth Gilbert — who was also at the premiere — as a “guide and mentor” throughout her time filming Trial By Fire. “I feel like I can relate to her very much so, because she’s here and I got to know her,” Laura said. “She really taught me a lot about how all it takes is one small act of kindness to change law, not only to change another person’s life.”

Ten years after Elizabeth and Cameron’s initial meeting, an article published by the New Yorker‘s David Grann, titled “Trial By Fire” went into further detail about the questionable methods and illogical conclusions in Cameron’s case and eventual death. That story is what inspired the feature film.

Not only is Trial By Fire a true story about the death penalty and the justice system — it’s a story about a “relationship that, because of its connection and intimacy, two people support each other in discovering what the real truth is,” Laura explained. “So, I think it’s a really important movie for Americans to see.” Trial By Fire is in theaters,