Every Job is a STEAM Job is our series looking at why kids will need tech literacy and coding skills to succeed in their future careers, no matter where those careers take them. Previously, we looked at how technology is changing construction, archaeologists, set designers, teachers, fashion designers, architects, journalists, small business owners, and the professionals protecting our national parks.

Just watch an old movie if you want to see how far technology has progressed. From 80s cell phones the size of shoe boxes to a plastic Godzilla terrorizing Japan, viewers can easily see on and off-screen technology evolve through the years.

Advances in film tech are not slowing down. Here’s how today’s filmmakers are using technology and how the next generation will use these tools to create films of their own.

The novelty has worn off 3D movies and many moviegoers have complained that they’re more of a gimmick than a film experience. Customers wear flimsy 3D glasses just to see the same tricks they’ve seen in previous movies while cinemas get to charge more for tickets.

This might be about to change. Hasan Chowdhury at the New Statesman reported that MIT researchers are working on developing 3D technology without the glasses.

“It’s important to note that 3D technology without glasses isn’t new; it has been used in a limited way with televisions,” Chowdhury writes. “What is new with this research is its potential application to the film industry along with improvements in picture quality.” Quality 3D effects instead of gimmicky pop-outs could bring back cinemagoers.

While glasses-free 3D technology is mostly found at tradeshows and in development labs, viewers might be closer to experiencing it than they think. According to Ricky Derisz at Movie Pilot, James Cameron hopes Avatar 2, the sequel to his 2009 hit, will debut in 2020 in glasses-free 3D. Cameron’s production company has signed a five-year deal with Christie, a technology company focused on 3D technology to develop a glasses-less option that cinemas can use to fully bring his vision to life.

James Cameron is known for waiting for technology to catch up before releasing his finished work. He first had the idea for Avatar in 1994, but waited until 2009 to release it when the necessary technology existed to fully realize his vision.

If Cameron can pioneer glasses-free 3D movies, then other filmmakers are sure to follow. 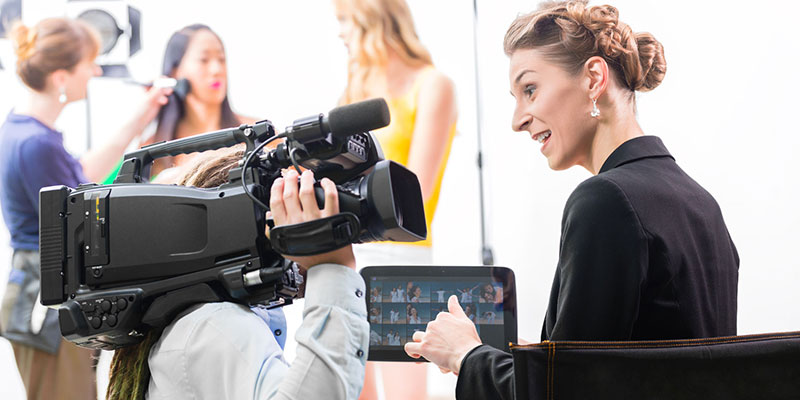 Virtual and Augmented Reality Are Growing in Popularity

The goal of 3D movies is to make audiences part of the experience instead of passive viewers. Virtual reality is another tool increasing levels of viewer engagement. VR brings audiences onto the set, letting them poke around to get a deeper look at the world the characters are in.

“Technology could be used to move audiences from witnessing events unfold to a world where they actually participate in them,” Daniel Davies writes at Factor.

Davies concedes that VR in major cinemas and in the hands of the consumer is still a few years off, but directors are already excited about what this tool can do for their creative ideas.

“In many African markets, music and movie sales are undermined by rampant piracy and artists’ work is often used without permission or payment,” Abdi Latif Dahir writes atQuartz. “This means virtual reality presents filmmakers with the opportunity to market movies directly to those who already own equipment or who can’t see the films unless they attend launches or special exhibits.”

Dahir adds that VR also allows African filmmakers to push the boundaries of production and create something that might get noticed and shared on the international market.

Augmented reality is being developed alongside virtual reality. Chris Morris at Varietyuses the example of going to a football game and seeing the yellow down markers to describe augmented reality. The audience is seeing real world players and objects, but technology has superimposed images to enhance the experience.

Pokémon Go is a popular example of augmented reality, as users see the real world in their phones but also see the Pokémon they’re trying to catch. AR is easier to use in the film world, but advances in technology can make it more interactive and personalized.

3D visuals and augmented reality provide different experiences for viewers, but technology is also changing behind the scenes. Here are just a few ways film production is changing to create better sets, sounds, lights, and footage.

3D Printing for Props and Sets

Concept software has made it easier for designers and filmmakers to execute their visions digitally, and 3D printing is helping turn those digital creations into 3D objects. David Sheldon-Hicks at Territory Studio listed how 3D printing has helped movies he’s worked on and other major films from the past year. These include:

While home tinkerers might think of 3D printing as a way to create new tools or pieces for their creations, movie studios are stopping just short of creating full-scale tanks and ships for their sets.

African countries aren’t the only ones benefiting from better film technology. In fact, the film scene is set to become increasingly diverse as technology becomes more accessible and advanced across the world.

In an article for The Hindu, Vishal Menon interviewed cinematographer Ravi Varman on how lighting technology has changed his approach and made his work easier.

“I’m able to use light to create exactly what my mind sees,” Varman says. “What felt like science has begun to feel like art.”

Interestingly, Varman also says his non-technological background is what helps him most of all with technology. He learns when to embrace tech, but also knows when to back off and let the fundamentals of filmmaking create something great.

Drones have made it easier for low-budget and indie filmmakers to get the shots they want.

“Filmmakers have used drones to shoot aerial footage for years, but issues like short battery life and inconsistent film quality have kept drones out of the mainstream for the most part — until recently,” the team at Tribeca Flashpoint writes. “Cheaper, safer, easier, and faster to setup and use than helicopters, drones are quickly becoming a popular tool among directors and cinematographers.”

This also means aerial views or new angles are possible without helicopters or bulky equipment pieces that could possibly get in the way of the shot. Not only does this make drone use more convenient, it also makes executing a director’s artistic vision easier.

Of course, some filmmakers might realize technology is their competition as well as a useful tool. Researchers at NYU have developed AI technology (which has named itself Benjamin) that writes screenplays.

According to Annalee Newitz at Ars Technica, Benjamin created the screenplay Sunspring, a short science fiction film about three people possibly in a love triangle. “Somehow, a slightly garbled series of sentences became a tale of romance and murder, set in a dark future world,” Newitz writes. “It even has its own musical interlude with a pop song Benjamin composed after learning from a corpus of 30,000 other pop songs.”

While the screenplay isn’t likely to win awards anytime soon for its plot and character depth, it’s an interesting look into the field of AI and creativity.

“The researchers at MIT’s Computer Science and Artificial Intelligence Lab recorded about 1,000 videos of a drumstick scraping and hitting real-world objects,” McFarland writes. “Videos were fed to the computer system, which learns what sounds are associated with various actions and surfaces. The sound of the drumstick hitting a piece of wood is different than when it disrupts a pile of leaves.”

If this technology becomes accessible to low-budget theatres and filmmakers, then sound designers might be able to find the perfect effects for their productions within a matter of minutes.

“Choose Your Own Adventure” Movies

Another advancement in technology that parents will be equally excited about is a “choose your own adventure” movie style.

According to Cristina Sanza at Inside the Magic, technology developed by CtrlMovie and Silvatar Media allows viewers to vote on their phones throughout the movie to see potential outcomes. The choice with the most votes by the audience is picked to advance the plot.

Not only is this type of movie more interactive (while creating a socially-acceptable reason to use your mobile device during a film) it also has the potential to boost revenue if people see the same movie multiple times to learn how different options would play out. 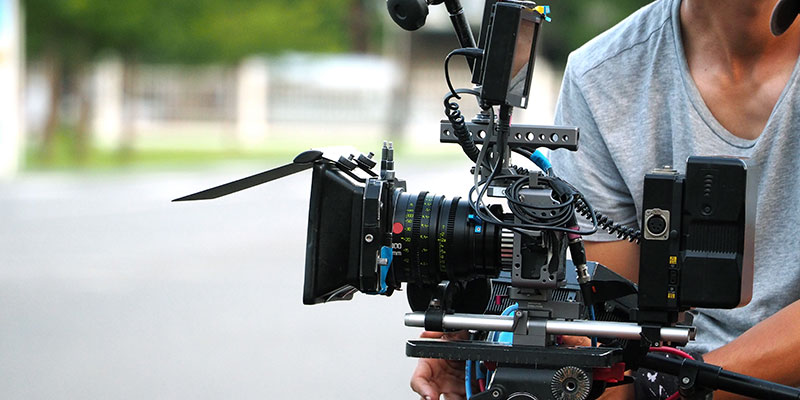 Technology is Changing the Industry and Cinema Business Plans

Technology isn’t just changing how filmmakers develop their craft or how cinemas display it. It’s completely changing the business side of film. Even employees who don’t work in production or technology will need to understand how the digital world affects their business.

For example, Peter Kafka at Recode writes that some studios are testing new streaming windows where customers pay an extra fee to watch a just-released movie outside of theaters. And Netflix has developed a straight-to-streaming line of movies so customers don’t have to wait several months to watch movies at home.

These developments concern film production and cinema companies, who worry that lower theatre attendance will cut into ticket sales and therefore overall profits.

Streaming, digital projectors, and international distribution all change the levels of involvement in the post-production process. A movie that bombs in America but is a hit in China will inevitably get a sequel, which means editors have to create on an international level.

“A major film can now have more than 500 versions going out of a lab, with a range of audio, image, premium, experiential, and language versions adding to the possible permutations,” Adrian Pennington writes at Screen Daily.

Not only does the number of versions add pressure for editors who need to meet production deadlines, it also puts a financial burden on cinemas. Many movie theatre chains feel like they need to invest in the latest film projects to show the best movie-quality in order to stay relevant. These drive up the costs of operating movie theatres in 2017 that many cinema managers didn’t face twenty years ago.

Of the 500 movie versions that studios have to generate, many of them have to be compatible with mobile devices. Tim Bajarin at Time recently explored how the Apple iPhone (which recently celebrated its 10th anniversary) has revolutionized various industries. Because of smartphone technology, video content creators have to think about viewers experiencing their films on the big screen and on hand-held devices.

“We can thank the millions of iPhones in the field, capable of letting people watch video anytime and anywhere, for prodding these studios to make this so,” Bajarin writes. “We can also thank the iPhone for fueling new types of video services like Youtube, Netflix, and Hulu — at least 50% of whose content is viewed on some type of mobile device.”

While technology has made editing and distribution easier, it has also increased the demands asked of production companies to create versions across all levels of viewership.

Filmmakers Are Optimistic for the Future

Some of these technological changes will make it easier for filmmakers to execute their visions, while challenging the structure of the industry itself. However, in an interview with ArtsHub, Bob Caniglia has a decidedly positive outlook on the future of film.

“Today’s industry is a much different place where filmmakers of all levels, disciplines, and backgrounds have access to the same professional tools,” he says. “We will only continue to grow as an industry when end users across the board, from Hollywood to independent film, short film, documentary, and student filmmaking, are truly empowered.”