Sunny Leone and husband Daniel Weber bare it all for their new Peta campaign!

Sunny Leone is a staunch opponent for mistreatment against animals. She’s associated with Peta since the last couple of years and makes it a point to voice her opinion against ill treatment of the animals. Joining her in this sane cause is her husband Daniel Weber. The duo recently shot for an advertisement campaign for this organisation which conveyed a very powerful and meaningful message of – ‘being comfortable in your skin and letting animals be comfortable in theirs.’ While Sunny and Daniel have bared it all in this photoshoot, that shouldn’t really be a concern here. Going nude for a set of pictures shouldn’t be as alarming as the reason behind it. 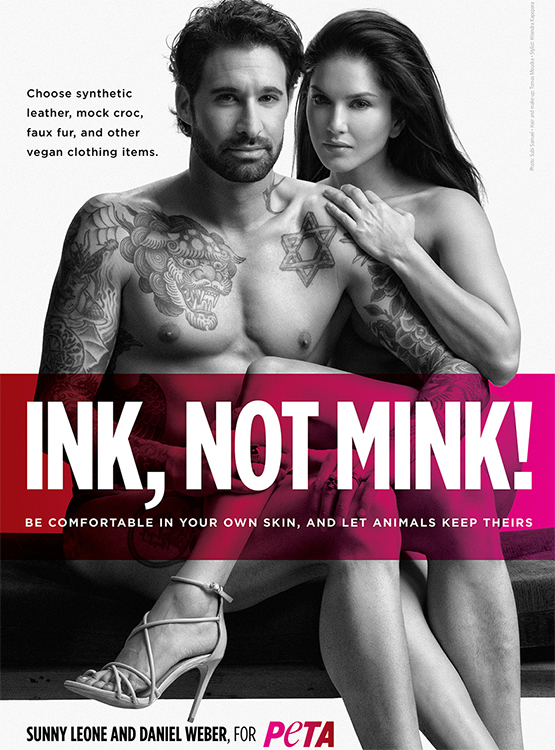 According to the estimates, every year hundreds and thousands of animals fall prey to the inhuman treatment they receive. And the rate of their extinction is alarming. It’s high time, we realise their pain and come out in support of the organisation. Celebs like Sunny Leone, Shahid Kapoor, Alia Bhatt are doing their best to support the cause and urging their fans to follow them in this noble task. While Sunny’s nude photoshoot with hubby Daniel Weber will grab all the unnecessary attention, it’s essential that we understand the campaign and the concept behind it.

Peta has been successfully fighting against animal cruelty since ages. The organisation recently convinced a high-end brand like Gucci to stop using fur in any of their designs and that’s a big move. Every year Peta conducts a poll to find out the hottest vegetarian of the year. You can simply click on their website and participate in the poll by voting for your favourite celebrity. The list of the stars who support being vegetarian include, Anushka Sharma, Kangana Ranaut, Alia Bhatt, Shahid Kapoor, Sunny Leone, Tobey Maguire, Vidyut Jammwal, Amitabh Bachchan, Bryan Adams, Casey Affleck, Joaquin Phoenix  and others.