Another day, another head-turning look from Rihanna! Back from Paris Fashion Week, our fave BadGal rocked a red hot slip dress, complete with a severe slit — but that’s not all! She added to the outfit, pairing an oversized tour t-shirt that featured her own picture on it over the look. What do you think of her interesting style statement? 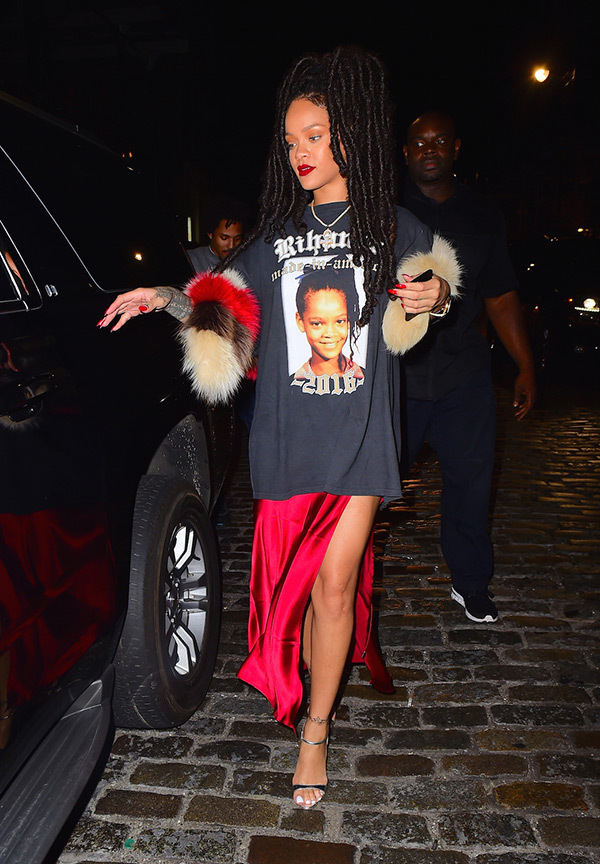 After a successful show at Paris Fashion Week Rihanna, 28, stepped out in NYC on Oct. 5 where she headed to Carbone restaurant before partying at 1Oak — and the star added to her signature sexy look with her head-turning outfit — in fact, it almost looked like she threw on whatever she had lying around! RiRi rocked a silky red slip dress that stopped right above the ankle and featured a severe thigh-high slit, allowing her to flaunt her svelte legs. She decided to further cover up, throwing a baggy tour t-shirt over the outfit which featured her own face on it. I’m actually a bit surprised that Rihanna didn’t just wear the t-shirt as a dress sans the slip dress — but leave it to her to always take the look a step further!

Considering RiRi is the same gal who isn’t above removing her belt after an indulgent meal at an Italian restaurant, we’re totally loving the way RiRi came totally prepared. In fact, she’s creating her own genre of fashion — her look says: I’m ready to turn up but I can’t resist the pasta.

More is more for RiRi, who layered a fur stole over the entire outfit. She continued to show off her major dreadlocks, a look she debuted earlier this week, and polished off the outfit with silver ankle-strap stilettos, a bold red lip and a red manicure.