Eat your heart out, boys! Nicki Minaj channeled her inner vampire while in France, seductively licking Bella Hadid’s neck at the amfAR Gala on May 25. With their risqué display at the star-studded event, the two bombshells broke the internet!
Nicki Minaj, 34, and Bella Hadid, 20, are turning up the heat at the annual amfAR Gala — in more ways than one! Cozying up to the supermodel at the highly anticipated event, Nicki nearly licked Bella’s neck and almost gave her a nibble. Taking to Instagram on May 25, she captioned the playful pic, “#BreakTheInternet with my Bella 👅 @bellahadid #VampireInCannes.” The ladies have been slaying the game during the 70th Annual Cannes Film Festival, rocking the sexiest ensembles ever! Bella opted for a lace white frock, while Nicki wowed in a plunging gown. 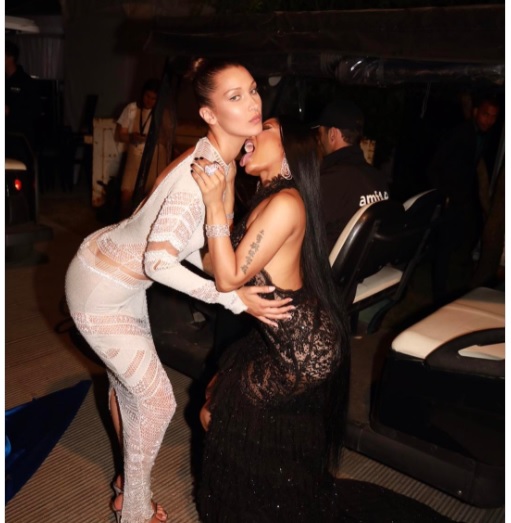 Nicki has been turning heads with her trend-setting fashion sense at the Hotel du Cap-Eden-Roc, wearing an couture Roberto Cavalli design with a lace corset. After hitting the stage, the rapper shared a photo of herself rocking another sizzling ensemble. “Just performed in this epic #Balmain ensemble. #AmfarGALA #Cannes,” she wrote. Nicki also mingled with “hot felon” Jeremy Meeks! The ladies definitely dressed to impress at the star-studded event, as Bella also commanded the red carpet in a Ralph & Russo couture gown, narrowly avoiding a wardrobe malfunction with her revealing choice. Get it, girl!

Nicki is enjoying the single life to the max! The rapper recently opened up about her rumored romance with legendary lyricist Nas, 43, on May 23. “We didn’t do the [nasty] because I’m just chillin’ right now,” she confessed. “I’m celibate. I wanted to go a year without dating any man. I hate men. But I might make an exception to the rule for him because he’s so dope.” Ooh la la!

Meanwhile, Bella is also focusing on her sky-rocketing career, but she managed to ignite romance rumors with heavyweight champion Anthony Joshua, 27, after reportedly flirting on social media. “She’s finally ready to fall in love again,” a source tells HollywoodLife.com EXCLUSIVELY. “She’s enjoying being single, working and being independent — but she also misses having a boyfriend who loves her. Bella is in a happy place and has set her eyes on the champ, Anthony.”