One of the industry’s most renowned cinematographers, Roger Deakins, recently revealed his intention to move into digital photography. The man with nine Academy Awards nominations is making the switch. Many filmmakers already sit comfortably on the “dark side,” including the most well-known proponent of the digital format – Michael Mann.

But why would a 35-year veteran give up the authenticity of film for the sleek look of digital? The recent developments in 3D might have something to do with it. With around 25 movies releasing theatrically in 3D in 2011, the money is clearly in the digital realm (yes, the industry is currently testing out more viable techniques for shooting 3D on film, but right now, as far as 3D goes, digital rules the day). But that doesn’t mean a filmmaker has to make a total switch and give up on film entirely. Yet, we have rarely heard from famous filmmakers who tested the waters of digital cameras and come away wanting nothing to do with the format again.

It is not uncommon for certain productions to devote segments of filming to the digital format. Black Swan used the Canon 7D to shoot its subway sequences because of its many benefits to a production. The DSLR cameras that plague film schools currently are the industry’s hottest new gadget. Anybody can shoot cinema-quality imagery for less than the price of a computer. When most professional film cameras cost tens of thousands of dollars, that’s quite a bargain. Arguably more importantly, it’s much easier to fit a DSLR into a subway car than a full film camera setup. 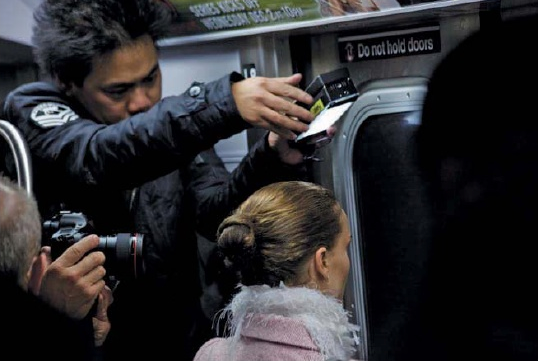 I’ve had an opportunity to use both film and digital equipment on film sets. The differences are staggering, but both have benefits that cannot be duplicated. Instead of listening to me explain the differences, here is one of cinema’s most talented photographers, Roger Deakins, in a discussion with /Film’s Dave Chensky last month:
This film Now, I’m shooting on a digital camera. First film I’ve shot digitally, because, frankly, it’s the first camera I’ve worked with that I’ve felt gives me something I can’t get on film. Whether I’ll shoot on film again, I don’t know. [Shooting on Digital] gives me a lot more options. It’s got more latitude, it’s got better color rendition. It’s faster. I can immediately see what I’m recording. I can time that image on set with a color-calibrated monitor. That coloring goes through the whole system, so it’s tied with the meta-data of the image. So that goes through the whole post-production chain, so it’s not a case of being in a lab and having to sit and then time a shot on a shot-by-shot because this has already got a control on it that’s set the timing for the shot, you know?

The clearest benefit of digital cameras is the immediate result. There is no time-staking process of handling the film, sending it to a post-house and watching dailies in a screening later. In some cases, you can even deliver the final product the same day to an editor through SD or CF cards.

A recent example is Monsters. Director Gareth Edwards spends a large portion of the making-of documentary on the DVD and Blu-ray showing audiences exactly why he chose to shoot on an EX3 camera with a Letus adapter and just three Nikon lenses. He had a handful of digital cards that could be instantly exported, backed up, and then formatted to be re-used – all within a matter of hours. Imagine the physical difference between lugging cartons of film canisters on location versus re-using a few digital cards throughout production.