Yes, Esha Gupta’s recent fashion outing is very pocket friendly!
For anyone who says fashion isn’t for ordinary masses clearly hasn’t met our Bollywood celebs. Well, if we blame them to burn a hole in our pockets with their outrageously expensive outfits, then we’re the ones to tell you that their wardrobes aren’t always as heavy as we assume them to be. They vary in price tags and some of them are quite pocket friendly. Yes, we mean it when we say the term ‘pocket friendly’. Remember the last time when Katrina Kaif stepped out in a Zara pantsuit which barely costs Rs 8,000 in Indian currency? Looks like Kat isn’t the only one who loves ordinary fashion. Esha Gupta too seems to have a soft corner when it comes to fashion and doesn’t mind picking up normal stuff if it suits her designer taste.
Esha Gupta who was last seen in a badass avatar in Ajay Devgn, Emraan Hashmi’s Baadshaho is well known for her hot and sultry photoshoots which broke the internet a couple of months back. It won’t be wrong to say that she redefined the word ‘sexy’ for us with her hot damn pictures and made everyone go gaga behind her. The actress was seen attending a jewellery launch in the city last night and what we assumed to be an exorbitant affair turned to be otherwise. The blue and white striped pantsuit opted by Esha for the evening looks too classy and chic at the same time but fortunately, it isn’t as pricey as it looks or deserves to be.
The blue and white striped trouser by H&M India costs around Rs 2,000 which is pretty decent and the matching double breasted will fetch you another 3,000 Rs. So, all you need to do is head out to your nearest H&M store in the city with Rs 5,000 in your wallet and you can easily get Esha Gupta’s hot damn look from the last night. Sounds great, right? Yea, we are heading there already. 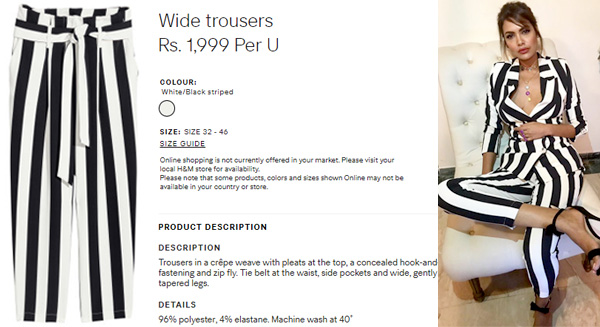 Happiness for us is finding out that the attire you wish to own is pretty affordable in real life. We couldn’t stop gushing about the actress and her latest fashion outing. And the fact that we are just few steps away from owing it, is pretty exciting.