Lady in red! WOW. Jennifer Lawrence looks stunning on the September cover of ‘Vogue’ in a Ralph Lauren gown. See more of her fashion looks in the magazine below!

Wearing a Ralph Lauren collection dress and Cathy Waterman earrings, Jennifer Lawrence goes patriotic for the magazine, posing in front of the Statue of Liberty in New York City. Shot by Annie Leibovitz, this is one of four covers for the September issue, celebrating Vogue‘s 125th anniversary. Jennifer’s stunning updo was done by stylist Shay Ashual. Her natural face was done by Hannah Murray, who used Dior makeup — she is a Dior ambassador. Her manicure was done by Yuko Tsuchihashi.

Jennifer is not just a pretty face. She’s been open and honest about her beliefs, including equal pay for women. “My opinion is: You can have millions of dollars and a dream career, but if you’re not willing to stand up for what you believe, or if you see wrongdoing and don’t talk about it, then you have nothing,” she told Vogue. “It’s the opposite of ‘Shut up and act!’ If you have a voice, use it. I don’t want to go into the grave just being like, ‘Well, I introduced the world to the Hunger Games movies and I bought a house on Coldwater! Goodnight!’ For me, it’s worth the criticism. The more criticism I get, the more the conversation is happening.”

Jennifer wears Dior, Versace, and Miu Miu throughout the photo shoot. Only the best for the Academy Award winner! She looks absolutely radiant in the photos! See them in the gallery attached. 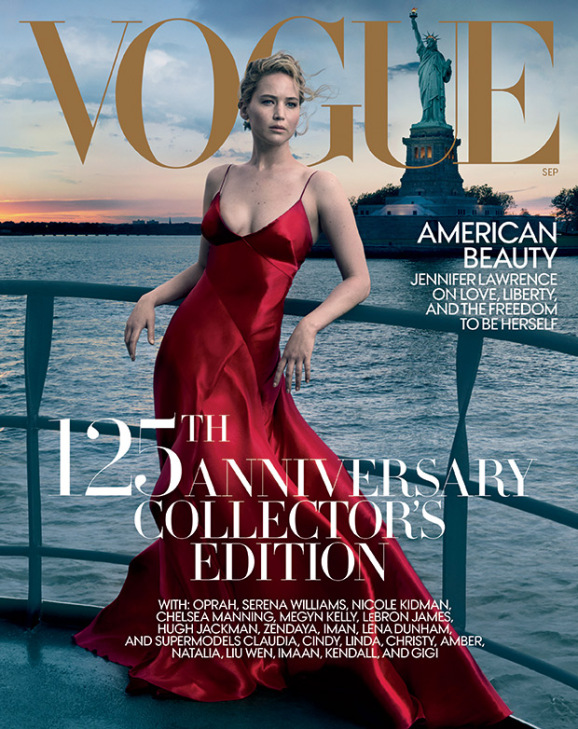