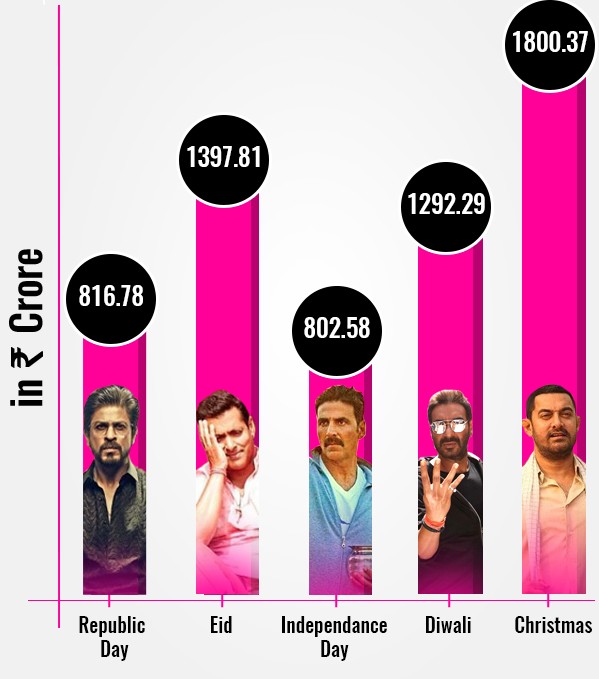 Ajay Devgn and Parineeti Chopra‘s Golmaal Again took over the box office this Diwali. Not only did it earn big bucks and became the highest box office grosser of 2017, but also proved once again how festive periods are beneficial for Bollywood. If you have seen, over the past few years, holidays like Republic Day, Eid, Independence Day, Diwali and Christmas have given films a huge boost. In fact, these holidays have given us the biggest blockbusters yet, in terms of public response as well as box office numbers. This is probably because of the fact that during these holiday periods, people want something to entertain themselves and what is better than a fantastic movie, right? And that’s probably why superstars like Salman Khan, Shah Rukh Khan, Akshay Kumar, Ajay Devgn, Aamir Khan and others book these festival dates for their films, well in advance. But which holiday is the most beneficial for films – Republic Day, Eid, Independence Day, Diwali or Christmas? Read our full box office analysis to find out the answer!

# Which holiday period is the biggest of them all?

As we told you already, each film that releases during these holiday periods collects a huge amount of money. If you check out the box office collections of each film released during each of these five festive duration, you will realise what we are talking about! So there’s money coming in from all around, but which holiday period gives the industry its biggest share in collections every year? Well, we compared the box office collections of all the films from 2012 – 2017 to gauge this better and looks like we have a winner!
Over the past few years on Republic Day, Hrithik Roshan’s Agneepath, Saif Ali Khan’s Race 2, Salman Khan’s Jai Ho, Akshay Kumar’s Baby and Airlift, Shah Rukh Khan’s Raees and Hrithik’s Kaabil performed phenomenally well at the box office. If you look at the collections of each of these films and add them up, you will realise that all the Republic Day releases from 2012 to 2017 have managed to rake in a cumulative total of Rs 816.78 crore.
Eid, over the past few years, has seen several blockbuster hits like Salman Khan’s Ek Tha Tiger, Kick, Bajrangi Bhaijaan, Sultan, Tubelight and Shah Rukh Khan’s Chennai Express. If you add the collections of each of these, you will realise that all the Eid releases from 2012 to 2017 have managed to collect a staggering amount of Rs 1397.81 crore.
Independence Day has witnessed the likes of Salman Khan’s Ek Tha Tiger, Ajay Devgn’s Singham Returns, Hrithik Roshan’s Mohenjo Daro, Akshay Kumar’s Once Upon Ay Time In Mumbai Dobaara!, Brothers, Rustom and Toilet: Ek Prem Katha release over the past few years! If you add the collections of each Independence Day release from 2012 to 2017, you will realise that the films have cumulatively earned Rs 802.58 crore.
Up next is Diwali, which has seen films like Shah Rukh Khan’s Jab Tak Hai Jaan and Happy New Year, Hrithik Roshan’s Krrish 3, Salman Khan’s Prem Ratan Dhan Payo, Ranbir Kapoor’s Ae Dil Hai Mushkil, Aamir Khan’s Secret Superstar, Ajay Devgn’s Son of Sardaar, Shivaay and Golmaal Again hit the screens during the festive period. The cumulative collections of all the Diwali releases from 2012 to 2017 is a massive amount of Rs 1292.29 crore* (The figure will rise as Diwali 2017 releases – Golmaal Again and Secret Superstar continue to rake in the money).
Last but not the least comes Christmas, which has seen mega blockbusters like Salman Khan’s Dabangg 2, Ranveer Singh’s Bajirao Mastani, Shah Rukh Khan’s Dilwale, Aamir Khan’s Dhoom 3, PK and Dangal hit the silver screens. With Salman Khan’s Tiger Zinda Hai set to release on December 22, 2017, we expect the overall collections of all the Christmas releases from 2012 to 2017 to touch a humongous amount of Rs 1800.37 crore.
Quite clearly, according to the box office collections, Christmas is the biggest holiday period for Bollywood, followed by Eid, Diwali, Republic Day and Independence Day!

# Ending the year with a BANG!

We have proved to you already that Christmas is the biggest holiday period of the year, courtesy the box office collections. In fact, it beats Eid, Diwali and the others by a huge margin. But how is this possible? Keeping aside the content of the films and types of movies released during the period, let us give you a brief explanation as to why Christmas might be the biggest holiday period to help Bollywood films rake in large sums of money.
It is a very simple logic and fact! If you look at the holiday periods and the days following each of these festive periods, you will realise Christmas has more number of holidays post it. While Eid, Republic Day and Independence are single day holiday periods, Christmas and Diwali aren’t! The Diwali holiday period is a week long, while the Christmas period extends to more than two weeks. How? Generally every year, the general audience, especially the children have an extended holiday from December 25 to January 3. The office of several companies are also shut post December 25 to January 1. With that, the movie going audience has enough time to watch any film released during that time. And as we said, during such festivities, people want to entertained and what better than a movie.
So, people might go see a movie once or twice during this period and that’s what happened in the case of Dangal, PK, Dhoom 3 and all the films released during Christmas! The connotation – “End the year with a Bang” is quite clearly what these films showcased and quite clearly they are killing it! And the best part of Christmas is that there are no big releases till the end of January. That means the Christmas releases have an extended run at the box office, which helps the films earn even bigger amounts of money. With Salman Khan’s Tiger Zinda Hai set to release this Christmas we are quite pumped for it to earn a humongous sum. Anyway, which is your favourite holiday period to watch a film? Share with us your thoughts in the comments section below! Also stay tuned to BollywoodLife as we get you all the dope, gossip, news reports and box office updates from the world of Bollywood right here.