John from Israel emailed me to ask what format most Hollywood films are shot on – film or digital. The question is rather topical as recently we’ve seen a number of high profile films choose to shoot on film, including Star Wars: The Force Awakens and The Hateful Eight.

I looked at the cameras used to shoot the top 100 US-grossing films for each year over the past two decades (1996 to 2015 inclusive).
Film vs digital among Hollywood movies 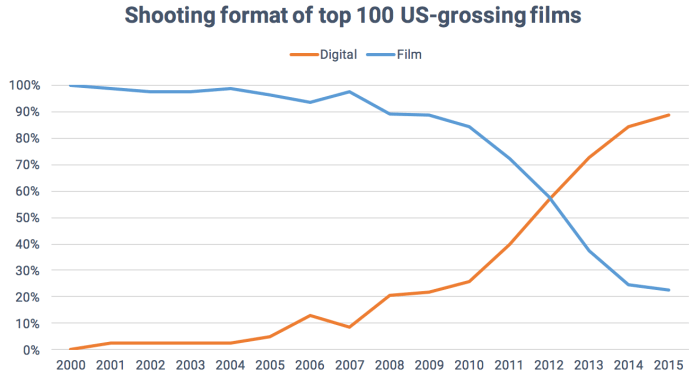 Sci-fi movies are twice as likely to be shot digitally compared to War films. 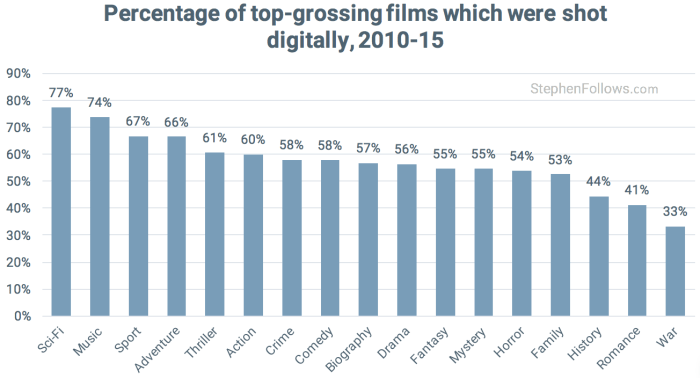 I showed these stats to a friend who is a Director of Photography and his thoughts were “History films shoot film more because it’s softer and people associate it with a period look now and Romance because film still makes actors look more attractive than digital”.
Which film sizes are used in Hollywood?

eastman-edison old school film cameraThe biggest differences between film cameras is the type of film you want to shoot on – the larger the film frame, the better quality the image as there is more space to capture detail. The most common formats include…

16mm – The smallest size used on professional Hollywood movies is Super 16mm, which will be used either when the filmmaker wants a gritty look or in an effort to save money. It was used on films such as Leaving Las Vegas, Evil Dead and Chasing Amy.
35mm – The traditional film stock used by the vast majoirty of movies which shoot on film.
VistaVision – VistaVison uses normal 35mm film stock but runs it sideways to give 65% more space to each image.
65mm – Used mostly by directors who have the power to demand the extra budget needed (such as Paul Thomas Anderson’s The Master and Tarantino’s new flick The Hateful Eight) or when the final movie will be distributed on IMAX screens.
70mm – Film stock which is twice as big as big as 35mm. Films projected on 70mm are normally shot on 65mm and blown up to 70mm.
The bigger the film size, the more it will cost (to buy and process) as well as adding size and weight to the cameras you need to use. 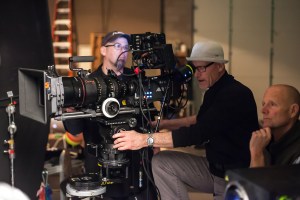 Which digital cameras are used in Hollywood?

130109_20130109_7thGeneration_Production_011-2When it comes to digital cameras there are so many different variables that it can make your head spin. There’s the frame size (i.e. 2K, 4K, etc), the level of compression (i.e. trying to make best use of hardrive space without compressing the image noticeably), chroma subsampling (which is labeled as 4:4:0, 4:2:2, 4:2:0, etc and is a complex topic – it looks at the level of detail you’re capturing by three different measures.).

The lowest-priced cameras which were used on my dataset of 2,000 top US-grossing Hollywood films are GoPros (from around £250) and Canon EOS (from around £2,000). The GoPro is a tiny, light, durable camera which was designed to capture footage that’s impossible with normal cameras (i.e. action sports) and the Canon EOS cameras are essentially souped-up digital stills cameras. At the other end, a new RED Scarlet Dragon will set you back around £8,600 and a Sony PMW-F55 CineAlta will cost from £20,000. Most of these prices are purely for the camera body, which means you need to also buy matte boxes, lenses, viewfinders, batteries, hard drives, etc.

The most commonly-used digital camera was the Arri Alexa, followed by the RED Epic and the Sony CineAlta.