Bollywood superstar Shah Rukh Khan celebrated 14 years of his evergreen film, Devdas. The film, which starred Shah Rukh Khan, Madhuri Dixit and Aishwarya Rai Bachchan in the lead roles, completed 14 years yesterday. The 2002 film, which was directed by Sanjay Leela Bhansali, has been one of the iconic films till date and SRK without fail tweeted his gratitude to director Sanjay Leela Bhansali.

He tweeted, “Devdas will always b special.Thank u Bhansali… the beautiful ladies & every1.Late nites..long shoots &so much love.” 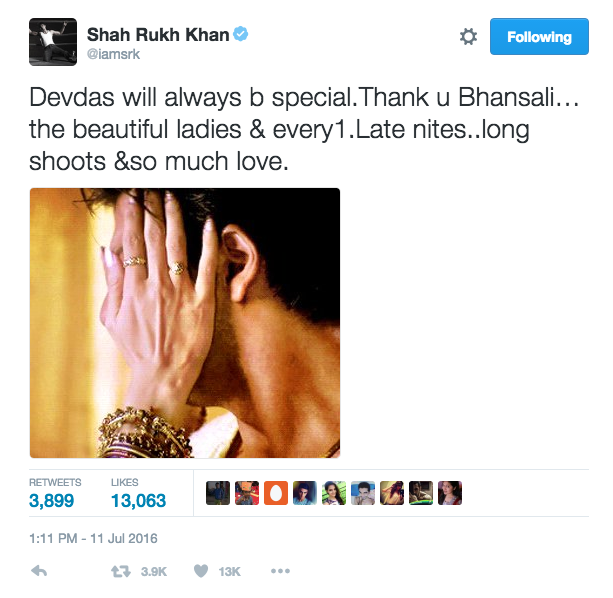 Well, Madhuri Dixit, who played the role of Chandramukhi in the film, also celebrated 14 years of Devdas in a unique way. The actress tried her hands on doing a Dubsmash video by lip-syncing to a famous Devdas dialogue. None other than Varun Dhawan joined the diva for Dubsmash video, as he was present on the sets of ‘You Think You Can Dance’ for Dishoom promotions.

Madhuri shared the video with a caption, “On completion of #14YearsOfDevdas this is my first dubsmash for you. Thank you @Varun_dvn.”