Ariana Grande took to Instagram on May 28 to announce she had to postpone two of her upcoming ‘Sweetener World Tour’ shows in Tampa & Orlando at the advice of her doctor after she woke up feeling sick.

Ariana Grande, 25, is “beyond devastated” for feeling under the weather after it forced her to cancel two of her highly anticipated shows on her Sweetener World Tour and she’s determined to make it up. The singer took to Instagram on May 28 to admit she woke up feeling sick and after seeing a doctor, she had no choice but to postpone the shows.

“tampa & orlando, i woke up incredibly sick today, ran to my doctor here and have been told to postpone these shows tonight and tomorrow. i’m so beyond devastated,” she wrote in the message, which was posted to her Instagram story. “i will make this up to you, i promise. please forgive me. i love you and i will be back and better than ever as soon as possible. love you.”

She continued with more messages explaining what steps the fans who planned on attending those shows need to take next with the ticket company, Live Nation and she also revealed the shows will now take place in Nov. “will keep you posted as soon as possible on exact dates but we will be returning in November and you will be able to use the tickets you’ve already purchased,” she explained. “thank you so much for your understanding. love you so so so so so so much.” 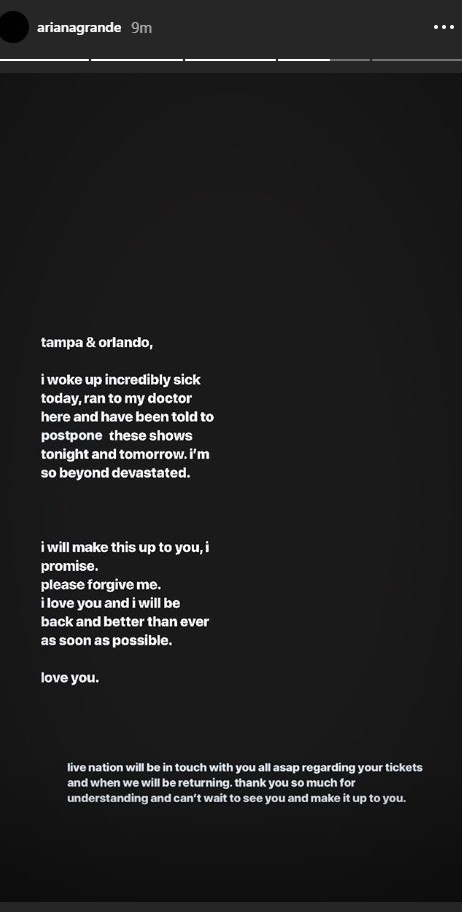 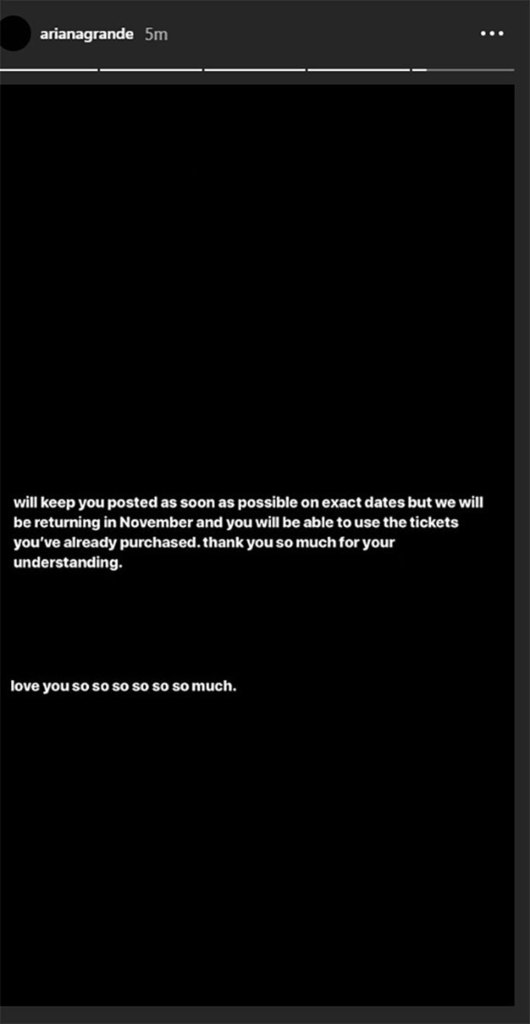 Ariana started her Sweetener World Tour in Mar. 2019 and it’s set to go on until mid Oct. Her Tampa and Orlando dates are now scheduled for the end of Nov. The shows are the third and fourth shows she’s had to cancel on the tour. The first two were in Omaha, Nebraska and Raleigh, North Carolina and the cancellations for those were due to scheduling conflicts with her headlining appearance at Coachella in Indio, CA in Apr.