In a poll story conducted by BollywoodLife, Deepika Padukonje beat Priyanka Chopra in the fashion arena! Read more deets.
Deepika Padukone definitely is a surprise package. One moment she gets a nay for her outings from the fashion police and the very next moment she gets a YAY! Priyanka Chopra, on the other hand, has always gotten an A plus for all her ensembles. Thanks to her talented stylist, Ami Patel, PeeCee has always managed to impress the critics for her outings. However, looks like while she might have achieved a lot more in the industry, both Bollywood and Hollywood, clearly, her fanbase hasn’t been quite supportive for this poll! So on Emmy’s 2016, when Piggy Chops waltzed the red carpet in a gorgeous red Jason Wu gown, she instantly got a thumbs up from the fashion police. 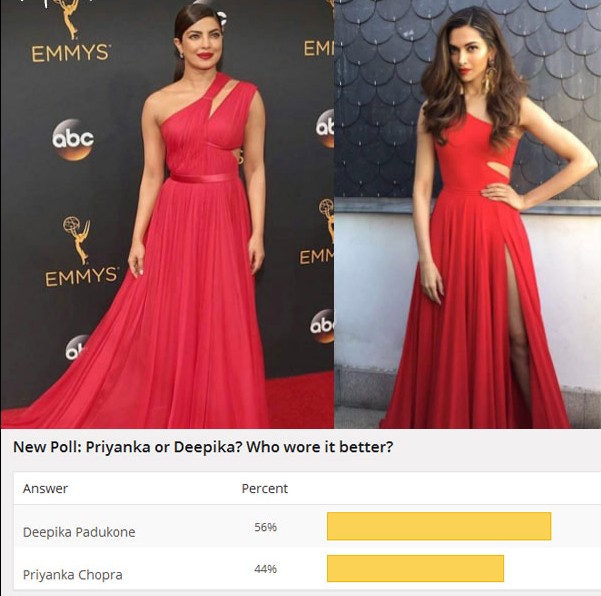 Of course, this took us back to IIFA 2016 press conference where Deepika had worn a similar red gown. The attributes including the one shouldered, peek-a-boo with flares seemed way too similar. DP’s gown also has a thigh high slit that accentuates her toned legs. Plus, with her hair let down, the actress finished the look with red lips. Gotta admit, there was nothing to complain about in this look. Let’s go to PeeCee’slook now. She too got her hands on a similar gown and while the thigh high slit was missing, her long train sure brought some spunk to the look. Even the hair neatly tied in a low ponytail with side sleek partition was a little boring but matched her face really well. (Also Read: Deepika Padukone v/s Priyanka Chopra: Who wore it better on the red carpet?)

Both the divas looked red hot. This, however, made us question that since both of them have managed to pull off such looks so bloody well, perhaps one of them was better than the other. You see, situations like these, we tend to hold our judgement to ourselves, unless it’s really really gorgeous. So yeah, here, both of them looked hot but looks like DP had an upperhand as she took away the trophy! In our poll that was made on Monday i.e. 19th September, we asked fans to vote for who rocked the red hot avatar on the red carpet. Miss Padukone beat Priyanka by 9 percent! (Also Read: Priyanka Chopra becomes the highest paid Indian actress in the World, beats Deepika Padukone hands down – read the details)