Team Mubarakan featuring Arjun Kapoor, Ileana D’Cruz and Athiya Shetty have been relentlessly promoting their family entertainer, Mubarakan in Dubai and whilst at it, they are acing the fashion charts with their sartorial styles.

The verdict for Mubarakan is out and the comic caper starring Arjun Kapoor, Anil Kapoor, Ileana D’Cruz and Athiya Shetty has been loved by everyone who caught it over the weekend. Promoting the flick in Dubai, the trio has been up and about sassing things up with their stunning styles, chutzpah and a spirited candour. While the ladies spruced up the style quotient with their colourful designer ensembles, Arjun pulled up the dapper meter with his monochrome style vibes. Picking out individualistic and fluent style vibes, Ileana D’Cruz maintained her promotional style tempo of fun, quirky and shimmery while Athiya continued her love affair with the stripes. The trio also indulged in some infectious fun camaraderie as they took Dubai by a storm.

Arjun Kapoor, the quintessential filmi bacha and a gabru jawan has traversed a long way from being an obese child to being the most eligible bachelor in tinsel town, courtesy classic good looks, a cute smile and is seen doing a double whammy in Mubarakan as Karan and Charaṇ Singh. He was styled by Anisha Jain. Rarely the one to take fashion risks, Ileana has always been known for her safe fashion choices, but with Mubarakan promotions, the Barfi girl dabbled in a fun, quirky and edgy promotional style and was styled by Sanam Ratansi. Newbie Athiya Shetty, with her strong promotional style game, ensuring that she isn’t lost in the crowd and showcasing an astute sense of stripe play and was styled by Ami Patel and Sanjay Kumar Dauhaliya. 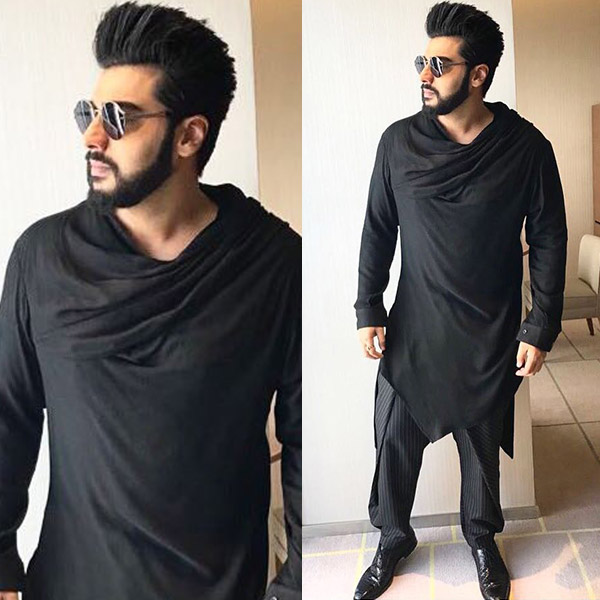 For the press con, Arjun donned an asymmetric draped neck long kurta-shirt from the pre-fall collection of Sarab Khanijou with pants from Dhruv Vaish, Dior lace-ups topping it off with a well-groomed mane and beard.