Call it another step towards world domination, as Priyanka Chopra has topped the Maxim India Hot 100 list for the fifth consecutive time…

Call it another step towards world domination, as Priyanka Chopra has topped the Maxim India Hot 100 list for the fifth consecutive time. Whoa! The magazine made the announcement today on their social media handles.
For the feat, Priyanka features on the June-July issue of the magazine. And, boy, saying that the cover shot is hot will be an understatement. The actress is wearing a transparent pantsuit and a white singlet inside. The picture of the hot cover was shared on Instagram with the caption, “She’s got the talent, she’s got the brains and she’s definitely got the looks–is it any surprise that after millions of fans showed their support, @priyankachopra is back to top the 2018 Maxim India Hot 100 List and grace the cover for a record-breaking fifth time? Welcome back, PC.” 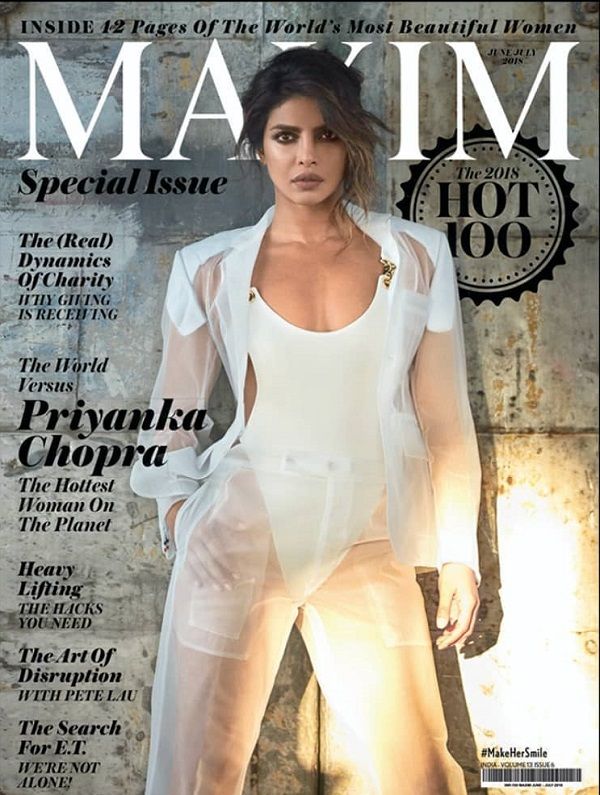 We are sure this cover featuring Priyanka is going get helluva reactions. Remember the armpit gate? In 2016, Priyanka had achieved the same title of topping the Maxim list. For the cover shot, she posed with her arms lifted and armpits exposed to the camera. Netizens cried for they thought that her armpits have been photoshopped way too much. But soon, Priyanka posted a candid picture in the same pose, settling the debate once and for all.

On the work front, Priyanka’s TV show Quantico will conclude with the third season. She is scheduled to start shooting for Bharat with Salman Khan soon. This will be her Bollywood film after Jai Gangaajal. She has also shot for the Hollywood comedy, Isn’t That Romantic with Rebel Wilson. She already has had two Hollywood releases – Baywatch and A Kid Like Jake.