Gigi Hadid has been working on a makeup collaboration with Maybelline for A YEAR, the star said on her Instagram on October 8. Read all the details on this new line below!

Gigi Hadid, 22, has been the face of Maybelline since January 2015, but she’s bringing her relationship with the brand to another level! She’s joined them to design and collaborate on her own line of makeup, and we can’t wait to try it! “A year in the making.. #GIGIxMAYBELLINE COMING SOON. @maybelline,” Gigi wrote on Instagram. It seems like the line is dropping on October 21, according to an official countdown on Maybelline.com. It looks to have eyeshadow, lipstick, blush, bronzer, and much more! Of course, she is modeling the makeup in some early campaign images and everything looks amazing!
In the official announcement, Gigi is siting at a table covered in makeup, with a wide range of lipstick shades, neutral eyeshadows, colorful eyeliners, brushes and more. She’s wearing a green fur coat, and orange sunglasses. The room is pretty, with butterfly images on th wall behind her. She looks so effortlessly chic with her hair in loose waves — stunning! 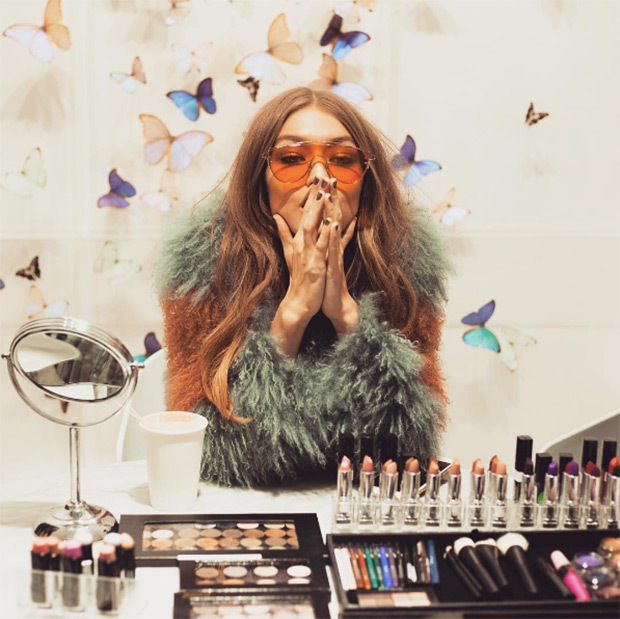 As you know, Gigi has another very successful collaboration with fashion brand Tommy Hilfiger. The Tommy X Gigi line just showed it’s third collection for Fall 2017 in London at a circus-themed fashion show! The line is full of leather, plaid, and crop tops, as well as outerwear and sports bras! It has a little bit of everything! We are so happy for Gigi’s fashion and beauty success.