We are in love with Parineeti Chopra’s this floral ensemble!
Parineeti Chopra’s fashion styling during the promotions of Golmaal Again, has received a mixed reaction so far from the fashion pundits. While she has opted for some stunning silhouettes, others have been equally cringe-worthy. But thankfully the latest one is one of the better one we have seen the actress wear in recent times. Fiercely feminine and feisty is how we would describe her latest sartorial choice and we have no qualms in saying that it has been her best so far. Bollywood stars are nothing less than stunners who up the glam quotient each time they step out. Parineeti Chopra is one such starlet who tries to regale us with her style shenanigans, succeeding most of the times. With ace stylist Sanjana Batra to her rescue, Pari tries to be bold and fearless enough, not shying away from trying out any silhouette. With a strong beauty game adding a dollop of charm, Parineeti Chopra has us swooning over her impeccable ethnic look, designed by Arpita Mehta.
Considering spring is still a few months away, it was refreshing to see Parineeti nail fall blooms and look resplendent in the Arpita Mehta creation. The designer’s Midnight Muse collection, which was showcased at the recently concluded Lakme Fashion Week Fall/Winter 2017, is one of our favourite ones and Bollywood celebs seem to share the same fascination for it. Earlier it was Sonakshi Sinha and Shilpa Shetty who had opted for the attires from the same collection and Pari is the latest celeb to join the list. Without elaborating further and making it sound like a thesis on fashion, here’s a quick recap of Parineeti’s fashion appearance during the promotions of Golmaal Again on the sets of the Drama Company. 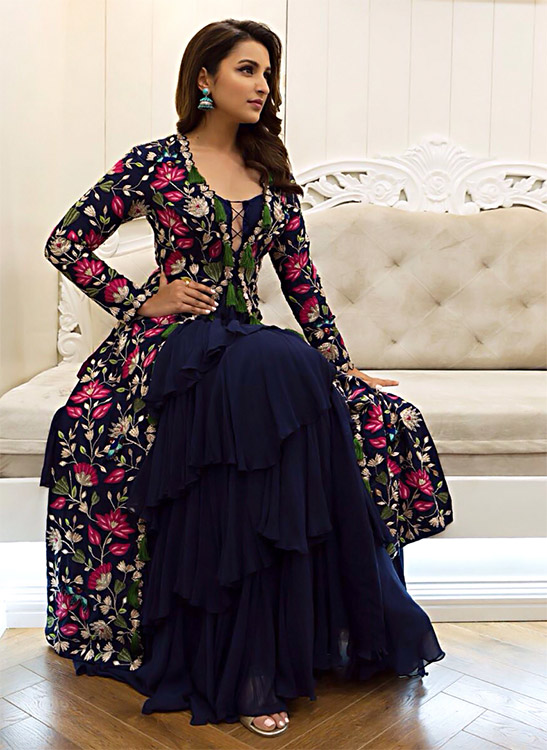 Parineeti Chopra opted for a charming floral printed lehenga from Arpita Mehta’s Midnight Muse collection and needless to say, she looked ravishing. She accessorized her look by opting for turquoise jhumkas from Amrapali jewels. 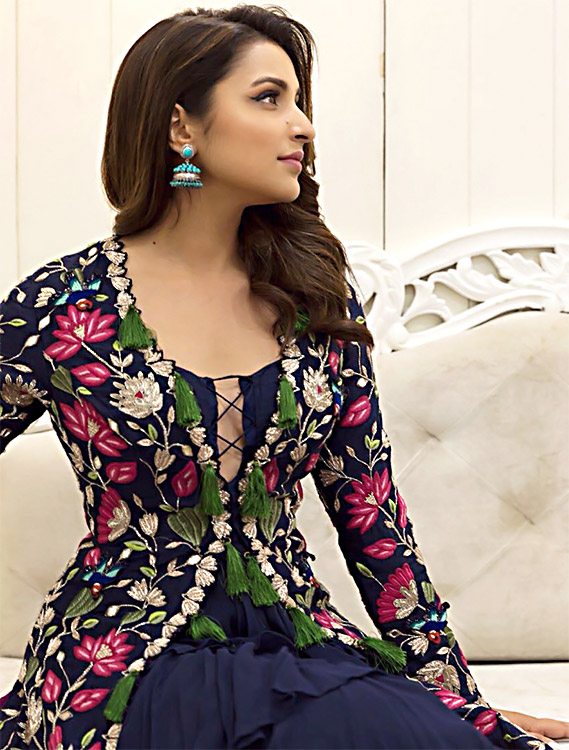 Makeup artist Arti Nayar gave her a very non-fussy look with subtly highlighted cheeks, pink lip colour and winged eyeliner. Pari played it safe with her hairdo, leaving it loose, letting her attire do all the talking. 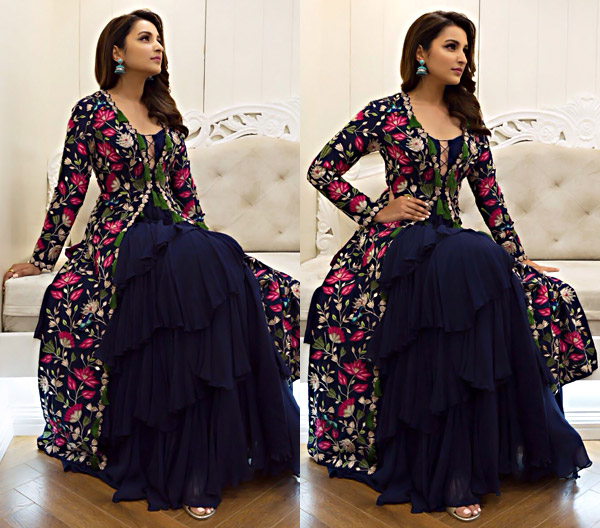 Floral embroideries have been making their way into the fall and are not just restricted to the spring. Their use in the glamorous black flowy fabric rendered a gorgeous ultra-feminine look to Parineeti’s toned frame. An apt choice, we are absolutely in love with her #ootd. Allowing her opulent lehenga to take center-stage, the actress kept her makeup bare minimum and her hairdo was apt for her attire.