‘Game of Thrones’ fans aren’t the only ones with post-finale blues following the show’s finale season. Emilia Clarke, who played Daenerys, has revealed her 1 regret from her time filming the show.

Just like the rest of us, Emilia Clarke, 32, is longing to hold onto a piece of the Game of Thrones franchise. The actress shared the June cover of Varietymagazine with Regina Hall, 48, where she used her cover story to reveal her one “regret” from the show. Apparently, the star is kicking herself for not taking a memento from the final season! “I didn’t take anything from the set and I deeply regret it and I’m very annoyed and I’m really hoping that the showrunners will give me a dragon egg. Having it come to its final moment feels utterly surreal and completely bizarre and so much life has happened in the ten years…At first it was an existential crisis. Who am I? Where are my dragons?,” she said. “It felt really deeply emotional… You saw everyone’s truthful fragility as it ended… When it did finally end, it broke everyone.”

Emilia, who played the the mother of dragons Daenerys Targaryen on the show, went on to admit that the show not only changed her life, but saved it. “Daenerys really saved my life, because it puts you in quite the headspace when you’ve had a brain injury. Walking in her shoes, I just put so much more into each season because it really was life or death and I felt so powerfully like she was saving me it was like I couldn’t see anything else, I could only see her,” the actress said.

Like many, Emilia was emotional with the ending of the show, which had an eight year run. The star couldn’t help but reminisce over her time playing the memorable character on the HBO series, and shared a heartfelt message ahead of the final episode on May 19. “Finding the words to write this post has left me overwhelmed with how much I want to say but how small words feel in comparison to what this show and Dany have meant to me,” Emilia’s caption for the post began. “The mother of dragons chapter has taken up the whole of my adult life. This woman has taken up the whole of my heart. I’ve sweated in the blaze of dragon fire, shed many tears at those who left our family early, and wrung my brain dry trying to do Khaleesi and the masterful words, actions (and names) I was given, justice. Game of Thrones has shaped me as a woman, as an actor and as a human being. I just wish my darling dad was here now to see how far we’ve flown.” 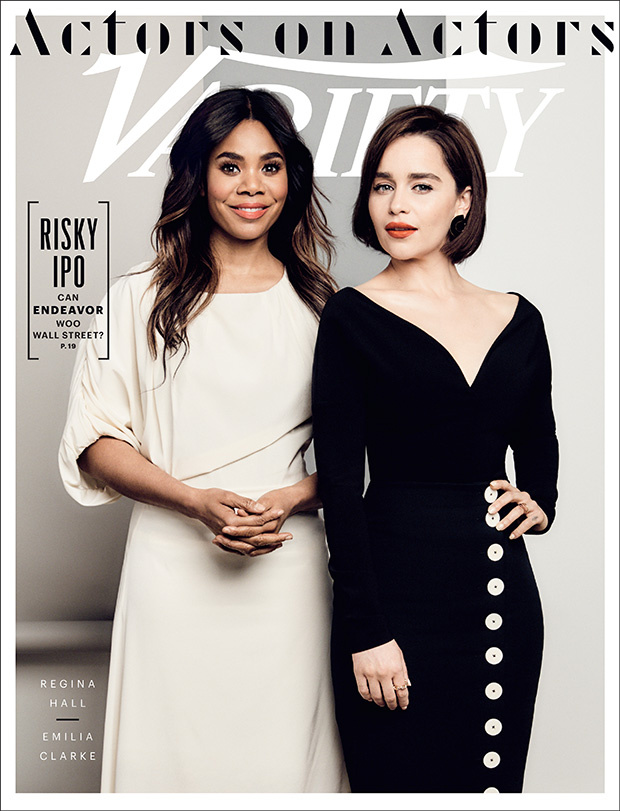 Emilia absolutely stunned in her new cover with Regina, striking a fierce pose in a sleek, black dress that dripped down low in the front. She said it best when touching upon the empowering roles on she and Regina both held on Game of Thrones and Black Monday, respectively. We are two women inhabiting roles that haven’t been seen before. Individual females in an incredibly male-dominated world,” she told the publication. Amen to that!