I caught on early that Ananya was meant to be an actor — sorry, let me correct that — Bollywood actor. Be Indian, buy Indian, made in India… Ananya is the right example,” laughs Chunky Pandey, as we chat with him and the latest star on the block, daughter Ananya, at their Bandra home.

“I listen to Pet Shop Boys, Bhavna [wife] loves U2, and our younger daughter Rysa only listens to rap. And Ananya? It’s Bollywood all the way. She was obsessed with it, I thought there was something wrong with her. She was good at academics, so I thought perhaps she would become a doctor like both my parents. But, when she got to class VI or so, I knew she would be an actress.”

At 20, Ananya is fresh off her debut, the Karan Johar-produced Student Of The Year 2, in which she starred along with Tara Sutaria and Tiger Shroff. And, even if you didn’t fancy the movie, you cannot miss her talent, and her fresh-faced charm. She plays Shreya Randhawa, a rich brat who falls in love with the middle-class Rohan Sachdev. And if Ananya has made headlines with her debut, so had her father.

Chunky (born Suyash) debuted with Pahlaj Nihalani’s Aag Hi Aag in 1987 but entered the national consciousness with his role as Babban, Munna’s (Anil Kapoor) friend in the 1988 hit Tezaab. Mostly known for his comic timing, Chunky — you have to have loved him in Aankhein — became a superstar in Bangladesh in the nineties, having delivered more than 10 hits there. 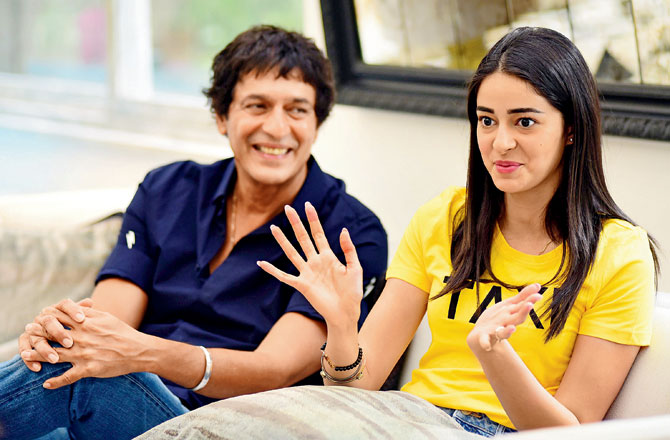 When we meet them, and watch as they pose for pictures, they have the Bollywood vibe intact, all the while seeming accessible and relaxed. “Dad hasn’t taught me acting…” Ananya says, and he laughs, “You are lucky I didn’t.” “But I know I have got my genes in place, and I get my comic timing from him. In fact, my next movie, Pati, Patni Aur Woh is a comedy, and even though SOTY2 wasn’t an out-and-out comedy, I had some comic moments.”

Hang around the two for a bit, and you know they are friends first. “In our house, there is a lot of privacy, we don’t look at each other’s phones. But we tell each other everything. I know all about the boys she finds cute…” says Chunky, “and I fear for them. Her attention span is very short.” Ananya laughs, “I am so young, just 20. Of course, my crushes change every day.” She may be young but after a bit of chatter, we realise she has her head screwed on right.

Dad and mom may be reading the scripts with her, but it is she who takes the final call. “My dad wants me to do my own thing, he wants me to live my own journey…” she says and he adds, “I don’t want to confuse her. I actually didn’t need to tell her much about anything. She belongs to a Bollywood home, her friends are star kids, she reads everything Bollywood, and she is an observant youngster. She knows the dos and don’ts. I just told her not to imitate anyone. I loved Amitabh, and you love Alia [Bhatt], but what worked for them, may not work for you. Choose your own path.” 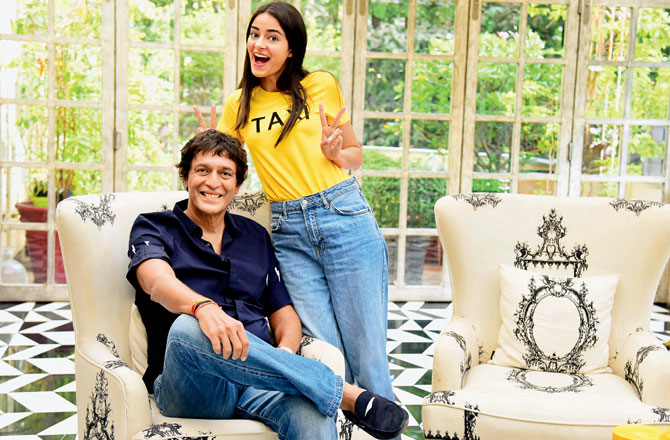 When we talk about her inspiration, Bhatt, who also made her debut with SOTY, Ananya’s eyes light up. “When I saw Alia on screen the first time, I knew this was what I wanted to do, and this was the movie I wanted to be a part of. She has grown strength to strength. I don’t want to copy her, but that journey where people watch you grow is so cool.”

Ananya also seems to have imbibed her father’s easygoing manner, and is a favourite with the paparazzi and social media. “I know most of the paps by name. I stand and chat with them. That easiness again comes from dad,” she says, to which Chunkey adds, “I think we both want people to be happy and comfortable. When you have a happy atmosphere, people work better.”

For now, Ananya seems content with the love she has received post the release, and is hoping to do more comedies, and even some “dark stuff because people won’t expect me to do that”. Talk about criticism and both have a similar approach — “don’t read, don’t react”. “We both are very thick skinned,” says Ananya, who has over three million followers on Instagram. “People have trolled me for being too thin… but I ignore it, because the love coming in has been so much. I want people who are watching me to look at me the way my friends see me. I am someone they can relate to. I am one of them.”

In the end, they just seem to be living their best life, celebrating Ananya’s success every day. As she says, “It’s been a high all through. This is what I have been waiting for all my life.”