Summer is two weeks away, meaning bras are no longer necessary! Emily Ratajkowski made this point in a white outfit for a stroll downtown with her and Sebastian Bear-McClard’s ‘new special guy.’

The pooch is actually Emily’s new puppy with husband Sebastian Bear-McClard, 32, which they joked about getting in lieu of a baby (the two have been married for over a year now). “Everyone out here having babies (Kim, Megan, Amy) but we got a new special guy ourselves. It’s a boy! Meet Colombo,” Emily captioned a photo with her husband and their puppy on May 11.

Colombo’s initiation into the family has been a pleasant one, because the pup is often by EmRata’s side. The model had a “date night” with Colombo at a fine dining establishment, as seen in an Instagram post on May 21. Emily was seen with her puppy again on the same day, that time wearing a leopard wrap blouse, high-waist jeans and red Nike Classic Cortez Sneakers. 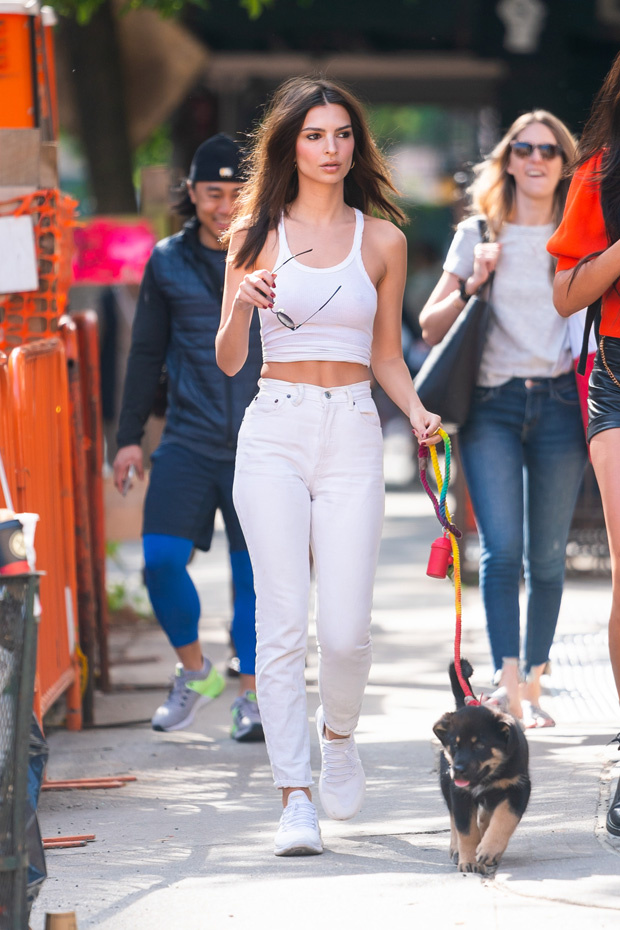 While Emily’s rocking a sheer top in the photos above, she bared all (save for a strategically placed flower) to protest a law that would ban almost all abortions, save for very few exceptions, which Alabama lawmakers passed. Although Alabama Gov. Kay Ivey signed the law on May 14, it won’t actually go into effect for several months. “This week, 25 old white men voted to ban abortion in Alabama even in cases of incest and rape. These men in power are imposing their wills onto the bodies of women in order to uphold the patriarchy and perpetuate the industrial prison complex by preventing women of low economic opportunity the right to choose to not reproduce,” Emily began her powerful message about women’s rights, hence why she paired it with a nude shot.